"Tangible interaction", a research field addressing the interface between the physical and the digital worlds, provides a new tool to facilitate the study of digital data. It overcomes the limitations of the traditional mouse, facilitating interaction and manipulation of 3D digital objects using real objects.

Tangible interaction research has a vast and diverse array of applications, for example: in music with the "reactable" used by the singer Björk, in cultural mediation to explain the stages of evolution, in natural history areas such as cladistics, in archaeology to reassemble archaeological fragments, in manufacturing for assembling aircraft or car engines, and in energy to validate geological models of subsoil.

For many years, researchers, designers, practitioners and artists around the world have been establishing the theoretical and empirical foundations of this field: designing technical frameworks, prototypes and interfaces. There is still great potential for future work, and the European community could be more active at an international level. Researchers from ESTIA (France), the Bauhaus University (Germany) and the HES-SO (Switzerland) organized the first Tangible Interaction Studio at ESTIA, in the village of Bidart, in the heart of Basque Country, France, from 26 to 30 of August 2013. The aim of this meeting was to connect young European researchers in the field of Tangible Interaction with internationally renowned researchers, and to establish networks for their academic future. In doing so we hope to ensure a strong future for the discipline. 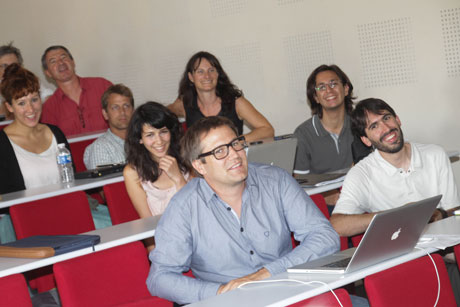 The TANGINT/FR group, supported by AFIHM (the Francophone Association in Human Computer Interaction) is behind the Tangible Interaction Studio. This French speaking working group was created in 2011 on the initiative of Prof. Dr. Nadine Couture and Dr. Guillaume Rivière from ESTIA. This event follows a first workshop held in June 2012, which brought together French and German researchers. This year, on the occasion of the inaugural Studio, Swiss, German, English, Italian, Austrian, Dutch, Chinese, Spanish and French researchers joined the working group.

At the closing of the Tangible Interaction Studio, on 30 August, the Institute of Advanced Industrial Technologies ESTIA (France), the University of Applied Sciences of Western Switzerland – HES-SO (Switzerland), the Bauhaus-Universität Weimar (Germany), the Université de Toulouse (France), the Ludwig-Maximilians-Universität München (Germany), and the University of Arts and Industrial Design Linz (Austria) signed a Joint Expression of Interest. The purpose of the agreement is to facilitate student and staff exchanges and to increase the involvement of the organization in summer-school and studios. The different groups have thereby agreed to devote a joint effort towards research on a European scale in the areas related to human-computer interaction, tangible interaction and smart environments. This convention represents a first step towards the constitution of a network that could lead to the creation of a European Network of Excellence (NoE) on Tangible Interaction.

The studio’s program spanned a five day period and was led by both internationally recognized senior researchers and PhD students. Day one of the program focused on laying the theoretical foundation thanks to Eva Hornecker, Michel Beaudoin-Lafon and Emmanuel Dubois. Nadine Couture and Brygg Ullmer gave an opening presentation (the latter via video message). A “panel session” moderated by Catherine Letondal concluded the first day. On Day two, we focused on applications and concepts thanks to Allan Dix and Martin Kaltenbrunner who gave a talk and a hands-on demonstration. The end of days two and three were devoted to student presentations by young researchers: Marie Schacht, Leonardo Angelini, Marvin Schneider, Nassrin Hajinejad, Renaud Gervais and Simon Stusak. On Days four and five, four workshops were led by Leonardo Angelini, Jochen “Jeff“ Rick, Arthur Vanpoucke and Marie Schacht. Exhibitions were submitted by Patrick Reuter, Simon Stusak, Stéphane Kreckelbergh and Guillaume Rivière. We decided that the Tangible Interaction Studio would take place in Weimar, Germany, in 2014, and in Fribourg, Switzerland, in 2015. 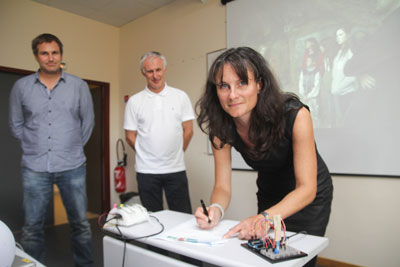 As a conclusion we asked participants to write down their "one word summary" of their experience at the studio, and the summaries included: design, atmosphere, food, inspired, exchange, tangible, friend, motivation, thanks, fun, interaction, knowledge, instructive, movement, creativity, arduino, interconnect, work, wonderful, perfect, rich.

Please contact:
Nadine Couture, ESTIA, France
Tel : +33 5 5943 8467
E-mail : This email address is being protected from spambots. You need JavaScript enabled to view it.