Generally, pollution measurement projects [1] are location static, and data may be controlled by entities subjugated to economic or politic factors. Consequently, environmental data may be subjective and valid only for a specific location (ie, the area covered by the environmental monitoring station).

U-AirPoll is a small, fully open (hardware and software), web standard-based and autonomous system of air pollution measurement. It can be carried by people or installed in vehicles such as bicycles, motorcycles or buses. To minimize cost, the project relies on the fact that increasing numbers of people are carrying smartphones. Thus, smartphone native sensorial capacities are extended with an external hardware capable to measure air pollution. This hardware base is cheap (around 70€) when compared to the environmental station’s price. Data are captured and sent from the air pollution sensors to the smartphone and uploaded from the smartphone to the Cloud. Thus, data can be collaboratively collected by many nodes (users or vehicles) from the public or private sectors. Data are open published and shared in the cloud to be easily consumed in XML. This approach thus avoids the gaps of traditional pollution measurement projects.

U-AirPoll communications architecture is composed of three parts: the drone, the droid and the Cloud services (Figure 1). In contrast to other solutions, the approach fully exploits the Web of Things paradigm.

The drone is a device that extends the phone sensorial capacities. Two versions are available: Firstly, the prototype version (Figure 2) including a custom CO2 concentration sensor and an already existing general air quality sensor. Secondly, the ready-to-use version (Figure 2, top-left) that is within an enclosure and avoids unnecessary hardware (eg, grove nest). The platform is extensible with up to 22 environmental sensors. It is built using Flyport by openPicus. Flyport was selected because it is a low cost open hardware with IEEE 802.11b interface and a micro-webserver embedded supporting REST (Representational State Transfer). 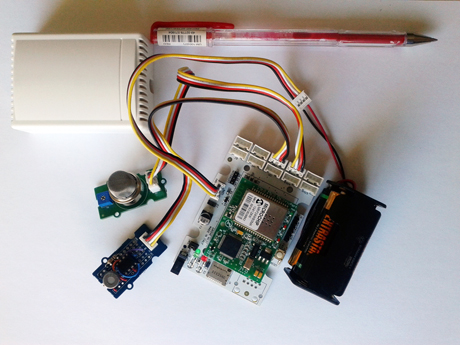 Drone hardware could be replaced by Flyport minified and/or washable versions to be embedded into clothes. One aspect of U-AirPoll’s versatility is its mobility: a drone can be placed wherever the user wants within the range of the user’s Smartphone Wi-Fi connection (eg, the roof of a bus).

From the droid perspective, the drone is just a service that is used to acquire data. The droid is a mobile application that uses the smartphone geolocation to complete air pollution data from the drone. It is implemented using Apache Cordova multi-device development framework that can run in up to nine different mobile platforms such as Android, iOS or Windows Phone. Apache Cordova was also selected because its applications are coded using standard web development technologies (ie, HTML, CSS and Javascript).

When not connected, the droid tries to locate the drone and checks server connectivity. When the drone is detected, data capturing starts and the droid saves all measurements into a local database on the smartphone, which is cheaper than storing them in the drone (ie, additional storage hardware is not required). In order to upload data, login is required. Once logged in, the droid begins to send data (ie, the pollution data from the Drone augmented with the smartphone geolocation). In parallel, the droid requests data from a server in a range of coordinates to show a map in the smartphone. The trend in the Web of Things field is to use REST for the Web services provided. However, to prove that our approach does not fix the Web service technology used, REST and SOAP (Simple Object Access Protocol) are mixed in the final solution.

All the cloud services have been specified using a model driven development environment called WebRatio. All the Java code generated by this tool is open source. The cloud services provide anonymous data pollution concentrations and provide an open access to data. To avoid problems with multiple connections (also known as the c10k problem) a JSP and c10k capable server, such as JBoss, is required.

The main idea behind U-AirPoll is to set the foundations for an open, distributed and mobile air pollution measurement system which allows data to be easily consumed by custom end-user applications and services (eg, a user or organization that wants to create green traffic routes to run or to cycle). Since U-AirPoll is an open hardware project, other people can add more pollution sensors, design their own enclosures or modify any piece of the project to better suit their needs.

This work has been funded by the Spanish Ministry of Science and Innovation (TIN2011-27340) and the European Regional Development Fund (ERDF).


{jcomments on}
Next issue: April 2022
Special theme:
"Fighting Cyber-Crime"
Call for the next issue