Wi-Fi technology, available in the vast majority of mobile phones, tablets, laptops and other computing devices that we use in our daily lives, has enabled widespread use of new applications and services. This technology, however, has a number of issues related to privacy loss, exacerbated by its ubiquity. Our research shows how the information freely transmitted by the Wi-Fi protocol can be used to identify links between people, ie whether they are family, friends, colleagues etc.

Wi-Fi protocol includes potential sources of personal information leaks. Wi-Fi enabled devices commonly use active discovery mode to find the available Wi-Fi access points (APs). This mechanism includes broadcast of the Wi-Fi network’s names to which the mobile device has previously been connected, in plain text, which may be easily observed and captured by any Wi-Fi device monitoring the control traffic. The combination of the network names associated with any single mobile device can be considered as a Wi-Fi fingerprint which can be used to identify the user to whom the mobile device belongs. Our research [1] investigates how it is possible to exploit these Wi-Fi fingerprints to identify links between users, ie owners of the mobile devices broadcasting such network names. 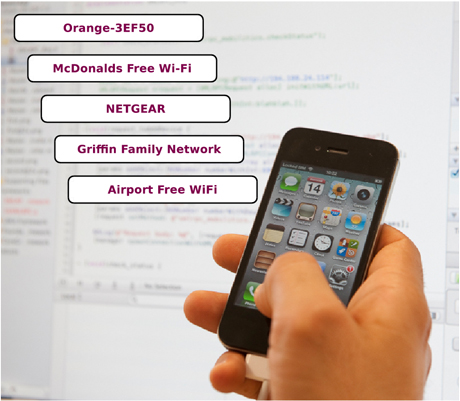 Utilizing a carefully designed similarity metric, we have been able to infer the existence of social links with a high confidence: 80% of the links were detected with an error rate of 7%.

Who should worry about it?
Owners of smartphones are particularly exposed to this threat, as these devices are carried on persons throughout the day, connecting to multiple Wi-Fi networks and also broadcasting their connection history.

What can be done to prevent the linking?
There are a number of industry and research initiatives aiming to address the Wi-Fi related privacy issues. The deployment of new technology, ie privacy preserving discovery services, would necessitate software modifications in currently deployed APs and devices. The obvious solution - to disable active discovery mode - comes at the expense of performance and usability, ie it would take longer for the Wi-Fi capable device to find and connect to an available AP. As a possible first step, users should be encouraged to remove obsolete connection history entries, which may lower the similarity metric and thus reduce the ease of linkage.

Please contact:
Mathieu Cunche
INSA-Lyon and Inria, France
E-mail: This email address is being protected from spambots. You need JavaScript enabled to view it.