Mobile ActDresses is a design concept that utilizes existing practices of accessorizing, customization and manipulation of a physical mobile device to predict and control the behaviour of its software. Existing smartphone technology can be augmented by taking inspiration from existing practices in relation to costume, jewellery, personalization and fashion.

There are various physical means by which people personalize their digital devices: by placing stickers on laptops; by using customized cases; and by attaching mascots and charms to smartphones, for instance [1]. Another area of customization is the use of personalized digital themes and the growing amateur practice of making small and personal mobile applications. The mobile phone as such is thus not merely a technological device but also an object for personal expression. Inspired by the trend of personalizing devices, we have been investigating the potential of using physical clothing, accessories and labelling as an alternative means of controlling mobile interactive systems by developing a prototype system: Mobile ActDresses. 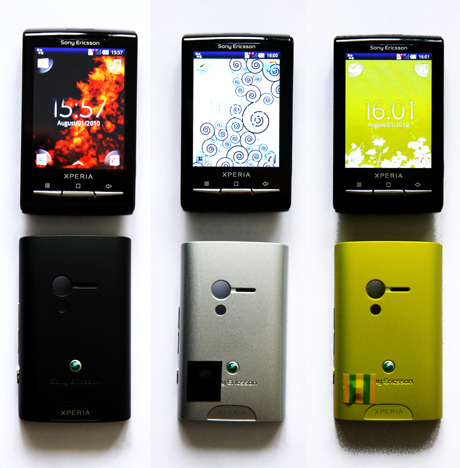 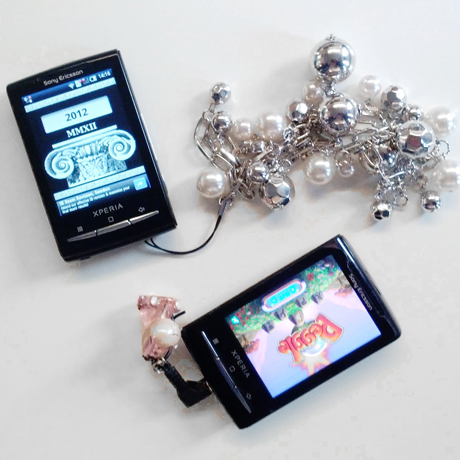 The design space of Mobile ActDresses ranges conceptually, from single on/off mode switchers to more complex configurations with combinations of active labels and accessories. Our prototype enables people to attach physical accessories to their smartphone and, at the same time, change its digital functionality or appearance. Below we outline examples of different strategies for implementing and deploying this design concept based on existing standards on mobile phones currently on the market.

Various implementation experiments
There are many forms of technology available for mobile phone handsets that could potentially be used to implement the concept of ActDresses [2]. However, wireless protocols such as Bluetooth and WiFi require active transmitters, and also have a relatively long range of communication, features that are incompatible with having signs in the immediate physical context of the device that they control. Using the phone’s camera to read barcodes on an object, for instance, requires explicit reading and is not ideal given that it conflicts with the immediate physical context requirement.

Another emerging wireless method is Near Field Communication (NFC), which enables the exchange of data between devices at a distance of up to ten centimetres from one another. Drawbacks in this case are that the reading must be constantly active on the device and that most devices currently do not support simultaneous reading of multiple tags. As with the wireless protocols, there is a range of possible wired or direct contact solutions for realizing the concept. Examples include experimental solutions such as Pin & play, iButtons, conductive stickers, resistors, USB, or even the built in memory cards.

There are thus a number of partially complete technical options currently available. Our conclusion is that it will be crucial to have a dedicated channel, whether it is wireless or wired. The key point is that physical ‘sockets’ restrictpositioning of tags whereas a wireless solution can be designed to be both free and ‘socketed’.

The design prototype
In our first prototype (Figure 1), we equipped physical shells with small but strong Neodym (NdFeB) magnets positioned at different locations. The absolute distance between the magnet and the magnetometer in the phone is sensed, and can be used to trigger events in software. In this case a simple service application was developed that changes the theme on a mobile Android phone according to the style of the shell. Furthermore, we used the headphones/handsfree jack as an example of a wired ActDress together with jewellery (Figure 2).

A general design concept for expression
To conclude, our goal with this prototype was to explore how the concept of ActDresses could be extended to digital artifacts in general [3]. Our inspiration comes from how clothes are worn by people to serve a range of communicative functions, indicating appropriate behaviours, group belongings, and expected interactions, for example. Similarly, physical accessories attached to a device could be used as a resource to indicate what mode the device is currently in, and what behaviours and interactions could be expected.

A day in Jill’s Mobile Life
Jill rarely leaves the house without her mobile phone, which she customizes physically as well as digitally to match her own clothes of the day. Thereby the phone itself works as a fashion item that she seeks to match with her outfit. Upon entering her office, Jill attaches the company shell to her mobile phone handset, which enables the phone to let her into the building, as well as acting as a company identity marker and label. Plus, it goes well with her work outfit. The phone is now set into a mode that automatically loads her work contacts as her primary address book in the phone. While the shell is on, all charges on the phone get placed on the company, rather than on her personal, phone bill. When leaving the office she removes the shell on her phone, which then replaces her office applications with her favorite spare time applications on the front screen. Later in the evening Jill goes out for a drink and attaches her ‘after work’-charm that shows her VIP status at one of the local clubs. Not only does it enable rebates at the club when paying with the phones digital wallet, it often becomes a conversation piece, and therefore a marketing tool for that specific club.