Although domestic smart metering has been introduced into our lives, it is still not easy for consumers to know how much electricity they are using. Consumers are unable to assess whether their consumption is low, average or high. “Social Electricity” is a Facebook application that aims to make individuals aware of their energy consumption by means of comparisons with the corresponding electrical consumption of their friends, as well as with the total consumption in the area where they live. Effective and realistic social comparisons could raise consumers’ awareness of their consumption behaviour, enabling them to take steps to reduce their electricity use and carbon footprint.

Energy conservation is a global issue with huge environmental, social and political implications. Smart metering has been introduced into homes to provide timely energy consumption feedback, helping consumers to more effectively manage their power use. Nevertheless, it is still difficult for people to quantitatively assimilate how much energy they consume. Consumers lack the required metrics to determine whether their total consumption is low, average or high. A promising way to understand the "semantics" of consumed energy is to compare it with the amount consumed by relatives, friends and neighbours. The increasing popularity of online social networking sites (eg Facebook, Twitter), allows the proliferation of social ICT applications targeting energy awareness.

Social Norms for Energy Conservation
People are willing and able to adapt their behaviour to energy-saving lifestyles if given the necessary feedback, support, and incentives [1]. While detailed feedback can raise people’s awareness of their consumption, community influence, which is recognized as an important factor in energy-saving initiatives, has the potential to drive residents towards a more persistent behavioural change [2]. . Social norms can motivate people to question their behaviour if they discover it is not "normal" [3].

Social Electricity: Energy Conservation through Social Comparison
“Social Electricity” is a Facebook application that aims to make consumers aware of their electrical consumption, by means of comparisons with the corresponding consumption of their friends, as well as with the total consumption in their street/neighbourhood/village/city/country. By effective and realistic comparisons, consumers may perceive their energy behaviour and take steps to reduce their electricity footprint.

The project has been developed by the Networks Research Laboratory, part of the Computer Science Department, University of Cyprus. It is supported by the Electricity Authority of Cyprus (EAC), which provides data on the domestic consumption in Cyprus every two months. 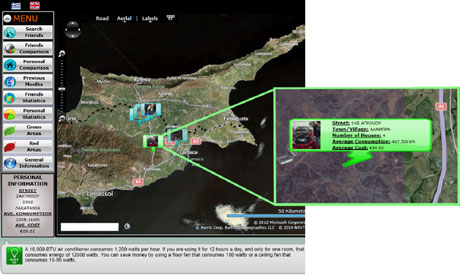 These data are anonymous to protect the privacy of Cypriots, and are aggregated at street level, to further ensure anonymity. Through Facebook, people can compare their consumption with their online friends and view statistics relating to the areas with the lowest/highest energy consumption. Users are also encouraged to add their own consumption, and compare it with that consumed on their street, neighbourhood, village or the whole of Cyprus. Moreover, users may observe the electrical consumption of their street (or their friends’ streets) over previous months (or the same month in previous years) and compare it with their present street consumption. 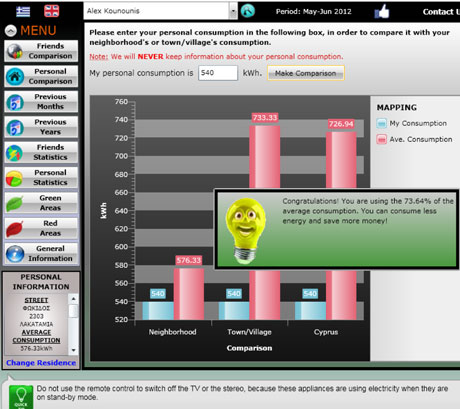 Social Electricity aims to encourage healthy competition, in which users compete with each other to reduce energy consumption. People from the same area are encouraged to cooperate in order to reduce the total aggregated consumption and improve the overall "green ranking" of the area.

This social application is an innovative initiative worldwide and has recently been awarded first prize in the 2nd Green ICT Application Challenge, organized by the International Telecommunication Union (ITU).
The project only started two years ago, but was officially launched recently and has already amassed over 1,000 users. This is significant, considering that Cyprus has a population of less than a million.

Evaluation
The project was recently evaluated with the use of online questionnaires completed by 190 users of the application. Eighty percent of respondents reported the application to be very useful. Half said they were positively influenced to become more energy-aware. Around 16% realized their energy consumption was high, while 78% said that the application helped them to better perceive and understand their energy behaviour and consumption. Sixty-two percent claimed their consumption was reduced relative to the same period last year. Our measurements in the last 6 months reinforce this claim, since in all these months, the streets of our users consume less energy in comparison to the streets of their postal code (4.3-6.5%) or to the whole of the country (2.5-4.8%).

The primary incentives for using the application are financial and environmental, and secondary incentives are curiosity and social responsibility. The most popular incentive for energy reduction would be a discount on the electricity bills of energy-aware citizens.

Thirty-nine percent of users believe the application will become more useful in coming years, in combination with the massive deployment of domestic smart meters.

Impressively, 64% believe that Social Electricity will help them to reduce their electrical consumption by more than 10% in the long-term.

Conclusion
Social norms may improve people’s environmental awareness, while comparison between friends may help them to reduce their electricity footprint. Social Electricity focuses on investigating the effectiveness of these factors on energy awareness and conservation of electricity.

Future work involves enhancing the features of the application, including developing more effective comparisons for electrical consumption between households that share similar physical characteristics (eg size, number of occupants, type of heating), as well as online, real-time competitions for energy savings between friends and neighbours. Accompanying the smart grid is the massive deployment of smart meters for real-time acquisition of household electricity consumption. The concept of Social Electricity is compatible with the future smart grid, since smart meters could enable real-time energy comparisons and promote competition between friends and neighbours, related to energy savings. Evidence indicates that the future Web will be social and pervasive, connected to the physical world. We aim to exploit this trend to promote energy awareness and conservation.

Please contact:
Andreas Kamilaris
Tel: +357 99 551016
E-mail: This email address is being protected from spambots. You need JavaScript enabled to view it.