We have designed “Affective Health”, a biofeedback system that supports personal empowerment rather than setting tasks for our bodies. Rather than reducing our bodies to objects that can be kept in perfect shape, our approach looks at what it means to be human.

A wave of wellness and health systems focusing on biofeedback are gaining popularity in the commercial world through apps that mirror factors such as one’s pulse, sweat levels or energy consumption. Commercial systems such as the Nike Fuel-band, Polar’s pulse meter and Affectiva’s bracelet are allowing users to interact with their arousal reactions or energy consumption in real-time, as part of their everyday life. Most existing biofeedback systems aim at relieving pain, creating interesting experiences, or making us healthier. 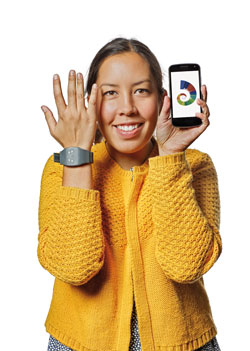 Affective Health is a system consisting of a bio-sensor wristband, developed by Philips Research, which measures movement (tri-axial accelerometer) and arousal level (Galvanic Skin Response). The bio-sensor data is transferred, via Bluetooth, to a mobile phone in real-time and it logs the data on the phone. A mobile application visualizes the movements’ trough shapes while arousal is fluently represented by a colour scheme. The measurements can indicate one’s current bodily state relative to the history of previous states. It can portray situations that are stressful and engaging as well as peaceful moments.

The system is designed to encourage the users to understand and interpret the feedback it gives them. The system is built on the notion of interactional empowerment [2] with the design allowing users to form their own, personal interpretation with the bio-sensor data and construct the meaning of the picture painted by the system over time. In this way the system empowers users to identify, reflect on, and find patterns in, their behaviour through a value-free design stance. It is through the interaction over time that the system starts making sense, mirroring bodily reactions or the users’ activities back to them. An interactional perspective on design will not aim to detect, and inform the user of, a singular account of the “right” or “true” interpretation of the user’s behaviour, but rather make experiences available for reflection and interaction. By carefully crafting the feedback from the system, timing its response, and making the design mirror the users’ visceral, emotional reactions, the system pulls the users into what we term an “affective loop experience” [3]. In this interaction, users actively take control over their own somatic reactions, learn how to master their own bodies and acquire a better understanding of themselves.

Our long-term trials of the Affective Health system show that people need more social solutions. People want to engage socially, exercise together, and chat. This raises the question: To what context would Affective Health be best suited? We have developed initial design concepts to understand which data users would like to share, for instance contextual data from social platforms or location or calendar information. It is also important to consider how the data could be stored in the cloud in a safe and secure way. The next step is to further explore how bio-data could be shared socially in real-time or past time, remotely or directly.

The Affective Health system is developed by SICS and funded in collaboration with EIT ICT Labs. The start-up company for the system, Mirrormirror, is in the initial stages of commercialization.

Please contact:
Johanna Mercurio, SICS Swedish ICT
E-mail: This email address is being protected from spambots. You need JavaScript enabled to view it.