Envisioning a smart grid scenario pervaded with controllable loads, we are working on the use of game mechanics to drive consumer behaviour towards efficient grid-wise use of energy. In order to cope with the challenges faced by current electricity networks, we aim to build a game layer on top of the electricity grid infrastructure and to use gamification as a catalyst for change, encouraging participation of customers in the energy field towards lower carbon generation and increased grid resilience.

Whilst the worldwide energy demand is expected to be 30 percent higher in 2040 compared to 2010, more of the same will not be sufficient to meet the challenges in this sector. In our work we advocate a consumer-centric approach, by encouraging a collaborative participation of customers for a more efficient use of energy. Presently, in the traditional model of electricity networks, users are not active participants, but merely represent sinks for electricity. Much like the internet, the electricity grid will be interactive, in the sense that power flow will become bidirectional and energy management will become distributed in the grid due to the many actors involved in the operation of the system (eg microgeneration, plug-in vehicles, controllable loads) [1].

Instead of varying supply in order to match demand, in a consumer-centric model users can adapt their energy consumption to balance excesses or shortages in the grid. This is particularly important during peakload intervals, when expensive, carbon-intensive generators need to be activated to cope with the high demand. Moreover, the increased penetration of renewable generators (photovoltaics, wind turbines) is expected to significantly increase the volatility in generation. 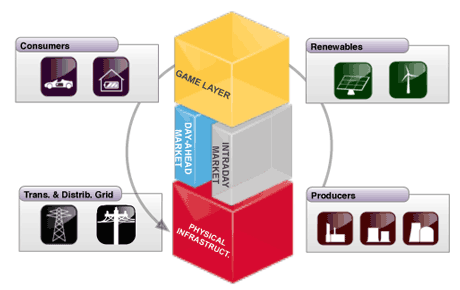 With these considerations in mind, we have developed a mechanism for coordination of the various actors in the grid, which operates on two levels (Figure 1). The distinction is correlated with the general organization of electricity markets. On one hand, the baseload energy requirements are traded in the day-ahead market, which settles the amount and price of electricity for each time-slot for the following day. On the other hand, the intraday market is responsible for mitigating the trading of short-term energy delivery. The difference in terms of time-horizon, means that different approaches are required to determine a viable scheduling solution for these two markets.

Firstly, to address the day-ahead market requirements we introduced a game-theoretic framework for analysing our setting given that consumers can be modelled as individual and independent decision makers whose behaviour impacts all other consumers and the grid as a whole. The key issue for enabling the network to work more efficiently is developing solutions that enable consumers to benefit from operating under a set of given constraints, provided by the network operator for flattening demand. To this end, a non-cooperative game is proposed in which agents representing consumers determine optimal strategies that can be translated into adaptations of their demand in order to maximize user satisfaction, represented as a utility function that aggregates energy and comfort costs. We then analytically derive the Nash equilibrium of the game - a strategy profile at which no user may gain by unilateral deviations - proving the existence and uniqueness of such an operating point for our given setting. Under this framework we introduced decentralized algorithms for non-cooperative environments where agents selfishly aim to maximize their utility, which we prove to converge to the Nash solution.

Secondly, the intraday market poses additional challenges, given that the system needs to react in real-time to sudden changes of the aggregated generation profile, in order to balance supply from intermittent renewable resources. Of course, agents as consumers in the network need to cooperate in order to attain the critical mass for significantly influencing the total demand curve and thus be enabled to participate in this market. This can be made possible assuming that consumers can engage in an online, self-interested negotiation for shifting loads and thus adapting their demand. However, considering the real-time constraints we reorient towards protocols that minimize computational and communication costs, unlike the classical stability concepts in coalitional game theory (eg the Core), where the computational complexity of the problem makes it intractable for all but the simplest of problems at hand. Here, we formulate the problem in terms of a cooperative game where agents learn prediction models regarding potential coalition partners and thus, can respond in an agile manner to situations that are occurring in the grid, by means of negotiating and formulating a priori solutions, with respect to the estimated behaviour of the system.

To sum up, we are providing a novel framework for managing the grid efficiently by envisioning a game layer on top of the electricity grid infrastructure that allows us to implement a consumer-centric approach as one key driving factor for a new vision of the grid via increasing participation of customers in the energy field.