In the future smart energy system, millions of domestic appliances will be managed in order to support the electricity grid. Is it realistic to build exact mathematical models and controllers for each individual appliance? In Belgium, at KU Leuven, the University of Leuven, and VITO, the Flemish Institute for Technological Research, we take a different approach.

Recent years have seen an explosive growth in renewable energy. The European target is to achieve 60% electricity generation from renewable sources by 2050. Owing to the low controllability of renewable electricity generation, engineers are looking for flexibility in household power consumption patterns. For instance, heat pumps can store warm water in a buffer at flexible times. Similarly, electric vehicles (EV) can be charged at flexible times during the night.

In smart energy systems, millions of flexible household devices, which can intelligently manage their flexibility, will become available. However, building an exact mathematical model and controller for each individual device would be impractical and complex, because each has different characteristics, and its usage is difficult to predict. For example, different types of EV batteries will have different charging characteristics, and EV owners may depart at different times than expected. Furthermore, algorithms for optimally controlling a large number of devices quickly become computationally intractable, while consumers require a fast response. For example, is it realistic to keep an EV owner waiting for 15 minutes before charging, because calculations have to be done?

In a joint effort between the Belgian university KU Leuven and the research institute VITO, we have developed a flexibility management system for a large number of household devices, without the need for complex mathematical models at each individual household [1]. Essentially, this management system consists of two layers: an energy controller and a power controller (Figure 1). The energy controller trades on electricity markets, and steers the collective flexibility of a cluster of household devices accordingly. Based on this steering behaviour, the power controller decides on the power consumption of the cluster’s individual household devices, and strictly respects each device’s comfort settings. 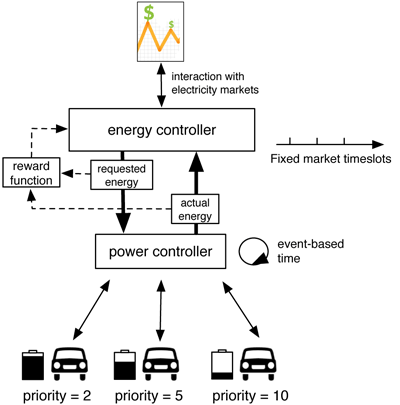 Based upon the agreed contract, the energy controller steers the flexible energy demand of its cluster. Before the beginning of each market timeslot, the energy controller sends a request to the power controller for the consumption of an amount of energy by the whole cluster. At the end of each market timeslot, the energy controller receives feedback on the actual amount of energy consumed by the cluster. This simple feedback mechanism hides any information about individual devices, and allows us to learn the appropriate energy requests, which are evaluated by a reward function (Figure 1). This reward function depends on the negotiated contracts. The key advantage of our approach is its independence of any underlying model, which means the energy controller can learn the behaviour of the cluster simply by observing the reaction to its energy requests [2]. The ability to learn these reactions arises from the repetitive collective behaviour of consumers.

The power controller translates energy amounts per timeslot to power control values for individual devices. In contrast to the once-per-timeslot control of the energy controller, the power controller continuously reacts to events (for example, a heat pump which is switched on) to control devices in its cluster, and respects comfort settings of consumers. The power control values are determined by a priority scheme, which assigns higher power values to devices with a higher priority. A device’s priority is based on the “imminence” of its energy consumption. For example, an EV with an SOC (state of charge) of 20% will have a higher priority than an EV with an SOC of 80%. In general, the priority can easily be determined by a few key parameters of the device.

In a simulation framework developed at KU Leuven and VITO, the two-layer flexibility management concept has been extensively tested with heterogeneous clusters of devices (eg electric vehicles, heat pumps and boilers). These simulations show that it is possible to continuously improve control actions over a two weeks period, until an appropriate set of control actions is found. Furthermore, at VITO, the first real-world experiments are being set up using the two-layer flexibility management approach. Examples of devices, which are currently being managed, are electric scooters and washing machines. Both simulations and real-world experiments show that our approach is able to find close to optimal solutions, without the need for exact mathematical models.