by Sébastien Lugan and Benoit Michel

The Green-Wake project has developed a new LIDAR (Light Detection And Ranging) scanner able to detect vortices generated by airplanes taking off and landing, thereby increasing airport security while decreasing the time between two consecutive flights.

Wake vortices and wind shear are potential causes of accidents and injuries to passengers and crews on aircraft of all types. They cannot be detected by sight and result in sudden disruption to the aircraft’s trajectory, potentially affecting safety. There are currently few options for protection from these phenomena, and the main way to ensure safety with regard to wake vortices is to impose mandatory separation between aircraft. The resulting delays can affect the airport’s operating performance. Green-Wake has developed and tested a Doppler LIDAR system able to detect both wake vortices and wind shear in front of an aircraft that may soon be inserted into the noses of commercial aircrafts or on the side of the runways and will help avoid the related hazards.

LIDAR challenges
Wake vortex and wind shear detection has been the focus of a few research programmes funded by Europe and the US, and the LIDAR technique offers a technical solution to this problem. Since LIDAR requires the use of a laser, there is a considerable challenge to designing and building a system that has the performance required to detect hazards, is suitable for installation on aircraft, and also meets the safety and cost requirements of the aerospace industry.

The LIDAR system may be installed in the airplane’s nose or on the ground on the side of an airport runway. Fixed locations offer several advantages, such as minimizing the weight and complexity of on-board equipment and providing measurements and warnings to all approaching and departing aircraft.

The Doppler LIDAR
The Doppler LIDAR system uses an ultraviolet laser that emits a beam into the air. The beam is slightly decolimated and diverted 10 times per second by a pair of orthogonal oscillating mirrors in order to scan a volume rather than a single line. When the beam encounters aerosols in the scanned volume, it is reflected back to its source, where a semi-transparent mirror lets the received photons pass through to a detector. Interference fringes between the original laser beam and reflected beam are used to measure the aerosol particles’ radial velocities. The useful air volume scanned by the system covers distances from 50 to 200m in front of the LIDAR system and the scanning area is approximately 120m wide and 50m high. As the beam is invisible and decolimated to present a minimum 50 mm width, it poses no safety threat to any person in the measurement zone.

Scanning mirrors
Oscillating mirrors provide the required volume scanning in front of the laser. Moving mirrors back and forth ten times per second may seem a trivial task compared with setting up lasers, light amplifiers, and interferometers. However, in order to give useful results, the scanning system required the development of a new, stiff, lightweight composite mirror with a beryllium face skin mounted on a honeycomb core. 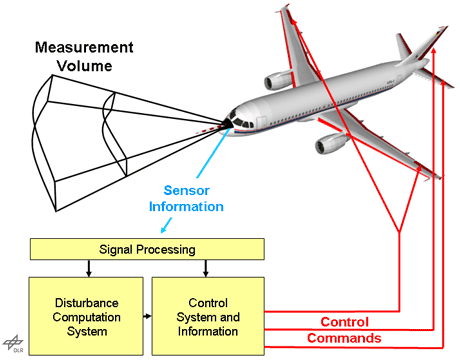 Airfield trials
Airfield trials were conducted over a two-week period at Charleroi-Brussels South (Belgium) airport in October 2012. With over 60 commercial airplanes taking off each day in front of the Green-Wake LIDAR prototype over the trial period, a lot of data were acquired to validate the concept and to give enough information to the team that is now facing the last step of this research effort: its implementation in a commercially deployable system. 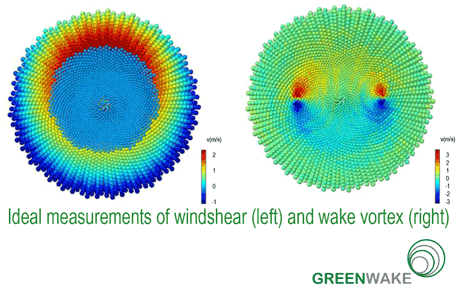 Figure 2: False colour representation of wind shear and wake vortex in front of a departing airplane.

A complementary European consortium
The Green-Wake project was funded by the European Commission from 2008 to the end of 2012. The project consortium included EADS Deutschland GmbH, Université catholique de Louvain (Belgium) and Technical University of Sofia (Bulgaria), the Aeronautical Research and Test Institute VZLU (Czech Republic), and the German Aerospace Center DLR, and a number of European high-tech SMEs.