ERCIM has selected Paweł Parys from the University of Warsaw as the winner of the 2012 Cor Baayen Award for a promising young researcher in computer science and applied mathematics. In a tight competition Paweł Parys was chosen from 21 excellent candidates from all over Europe as an exceptionally gifted young researcher. 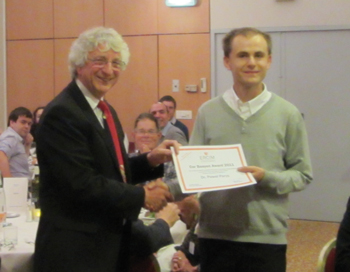 Paweł’s main fields of interest are algorithms and computation theory. In his young career, Paweł’s research has already led to two extraordinary results in very different fields such as linear time evaluation of XPath and higher-order pushdown automata.

The XPath (a language for addressing parts of an XML document) evaluation problem is important in practice, in particular for the performance of Web browsers which generally include XPath evaluators. These evaluators are often quite inefficient, in many cases running in exponential time (in relation to the size of the query). In his groundbreaking work, Paweł devised a system for evaluation of XPath in time linear to the size of the document. Until recently, this was widely believed to be impossible. The improvement is dramatic for XML documents with billions of nodes, such as the DBLP database, for example.

Although Paweł Parys just finished his PhD in January 2012, his work has already been recognized with best student paper award at PODS 2009 (the top database theory conference), the Witold Lipski Prize for Young Researchers in Computer Science 2011 (an award for the best young Polish computer scientist). He was also the recipient of a "Start" stipend for young researchers awarded by the Foundation for Polish Science in 2012 as well as several achievements in programming competitions.

The finalists in the 2012 competition were (in alphabetical order):