Many countries with emerging democracies aspire to a system similar to European democracy. International Organizations aim to help these countries to introduce a fairer election environment but their efforts are not always successful. Rigged elections mean that many electoral candidates are unfairly disadvantaged In this situation, tension can escalate and, in the worst case scenario, this can lead to military confrontation.

Researchers from the N. Muskhelishvili Institute of Computational Mathematics of the Georgian Technical University suggest a new way of applying ICT to improve the election process in a biased environment and avoid threats to democracy (see eg [1]). They propose VoterBallot, a management information communication system for electoral candidates. It includes four main components: physical infrastructure, software, structured information and training.

Physical infrastructure and software
At each polling station there is a trained representative of the candidate, equipped with a mobile device (or satellite phone) with extended media functions, connected through the Internet (free of any control) to the server (see eg [2]). The server is located at the electoral candidate’s office (mirrors are in various places). The system’s software contains: databases, forms, and various analytical programming modules, installed on the server. The main database is a three-dimensional matrix with the elements of linear arrays. The lengths of arrays are not defined in advance. The database is connected to the candidate’s website.There are as many as tens of thousands of polling stations in some countries, indicating the breadth of VoterBallot’s physical infrastructure. 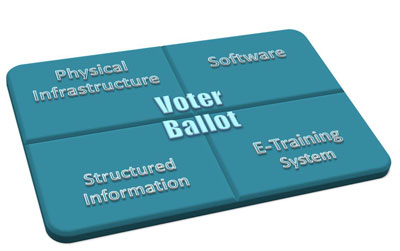 Structured information
This is the concept that underpins VoterBallot. It should be designed in collaboration with the candidates and their legal teams and includes three main parts:

The total number of scheduled events and of possible irregularities ranges between 200-300 and may differ in different countries.

Formally, the element of the structured information is a linear array of data related to a given event. The structure of each event is uniform, though the actual data, collected at different polling stations, may differ. The elements of each array are the numbers or the text, photo, audio or video files. The data are time-dependent: some of the events may be repeated or adjusted for several times.

Implementation of VoterBallot: the training of representatives
The process of implementing VoterBallot should start several months prior to the election. During this time it is necessary to train a large number of the staff (there must be a greater number of trained staff than there are polling stations). We suggest the following e-training system:

How it works
Although Election Day is the most important, the system is already loaded during the pre-election and post-election periods.

Representatives collect the information according to the forms from all polling stations and send it via the mobile devices to the server. Information is automatically analyzed and a subset is made public via the website. The matrix reacts to any irregularities and sends directives or prepared complaints with testimonies back to the mobile device. Complaints are printed and delivered to the committees or are brought to the courts later.

The benefits of VoterBallot are:

This work is supported by the Grant Project GEO-RECAP, #266155, FP7-INCO-2010-6. This important issue requires additional research and investigation and we hope that the idea will arouse the interest of European researchers.