Compared to a contemporary robot, the human body comprises a large number of actuators and sensors. Nevertheless, the central nervous system can efficiently extract just the right low-dimensional subsets of these for fast and precise motion control. How is this achieved? In the EU FP7-ICT project THE, scientists from neurophysiology, physics, computer science, and robotics are working together in order to try to answer this question. SICS' role is to try to understand and model some of the functioning of the mammalian central nervous system in order to apply it to adaptive control of robot limbs.

The Synergy: a clever brain trick?
The human hand-arm system has on the order of 102 degrees of freedom, but studies [1] have shown that just a small number of combinations—"motor synergies"—of elementary movements account for most of the motion repertoire. How and why are such synergies formed? The hand-arm system also has in the order of 104 sensors. How does the brain "know" which sensor combination, "sensor synergy", best represents which motor? Knowing the answers to these questions would enable us to improve the design and control of robots. It is currently a real challenge to achieve anything approximating human agility in robots.

In the EU FP7-ICT project THE (www.thehandembodied.eu), scientists from neurophysiology, physics, computer science, and robotics are working together in order to try to find the answers. Considering the complexity of the mammalian central nervous system (CNS), this may appear to be an impossible task. However, we are beginning to see indications that much of the observed complexity in the adult is due to experience, while some of the fundamental, underlying mechanisms may be simpler than previously thought. Could it be that nature originally provides a relatively simple, general-purpose substrate, on which our interaction with the environment builds and optimizes the control circuitry? As our picture of the low-level machinery is crystallizing, some surprising properties are revealed.

von Neumann: ahead of his time
It is well known that when John von Neumann wrote the seminal “First Draft of a Report on the EDVAC” in 1945, he was deeply impressed by Alan Turing, but it is seldom mentioned that he was also much inspired by McCulloch and Pitts’ work in neuroscience. In fact, references to the nervous system abound in the report, and the only publication referred to explicitly is their 1943 paper “A logical calculus of the ideas immanent in nervous activity”. Although, for many years, there has been public debate on whether the brain can be compared to a computer, or even be understood at all, von Neumann himself considered the brain and the computer two kinds of automata. In his last work, "The Computer and the Brain", written in 1956, von Neumann compares computers with the brain, and many of von Neumann's observations are amazingly on target, more than 50 years later.

The CNS is obviously very good at controlling biological mechanical systems. If von Neumann was right, and the brain essentially is a kind of automaton, we might be able to extract useful knowledge of the brain's motor control algorithms, including the properties of synergies. This is a central theme of the THE project. SICS' role is to try to understand and model enough of the function of the mammalian CNS that it can be applied to adaptive control of robot limbs.

Starting with ion channels
In contrast with other attempts - which typically proceed top-down from a cognitive behavioural level - our approach is to start on the lowest, ion channel level in the structural hierarchy of the CNS. From there, we derive the function of neuronal microcircuits involved in motor control. A microcircuit is a combination of a small number of neurons operating together; it can be seen as the next level above neurons in the hierarchy. These circuits engage motor centra, the spinal cord, the cerebellum, and the pre-cerebellar structures in a complex pattern of feedback loops (Figure 1). 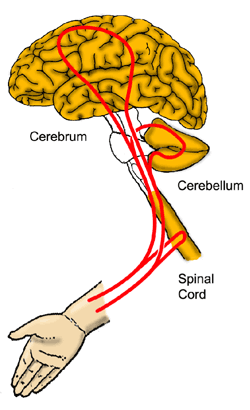 Figure 1: A simplified view of motor control loops of the hand arm system: It contains at least three cascaded feedback loops, involving the spinal cord, the cerebellum, and motor centra in the cerebral cortex.

A serious challenge is that the macroscopic operation of microcircuits depends critically on neuronal membrane molecular dynamics, which is directly affected by thermodynamic noise. Although noise in an electronic circuit is normally undesirable, we can see that evolution has taken advantage of this in order to design robustness into circuit operation. However, the crucial function of noise in microcircuits requires non-trivial mathematical treatment, and stochastic models of neuronal activity are among the most advanced applications of the theory of stochastic processes in biology. Nevertheless, our preliminary results offer some surprises: for instance, it seems that much of the fundamental processing in the CNS is in fact — linear!

Project partners
SICS cooperates closely with a group of neurophysiologists led by Dr Henrik Jörntell at the Department of Experimental Medical Science at Lund University, Sweden. This group performs sophisticated electrophysiological experiments, where physical connectivity and signal transmission between neurons are recorded in vivo.

Please contact:
Martin Nilsson, SICS, Sweden
E-mail: This email address is being protected from spambots. You need JavaScript enabled to view it.