by György Kovács and Imre Paniti

In the summer of 2011 a new robot laboratory began operation in SZTAKI, in the Computer Integrated Manufacturing Research Laboratory, with the aim of supporting international networking and raising the public and professional profile of research and development in this field.

SZTAKI was one of the first institutes in Hungary to initiate robotic and intelligent manufacturing research around 40 years ago. The institute achieved outstanding results in fields related to robotics and manufacturing automation, including: pattern recognition, sensor technology, controller developments and virtual and extended manufacturing. The establishment of the new robotic laboratory will allow us to join high-level EU R&D efforts in joint projects, and to extend our scientific- and application activities.

The new laboratory has two robots (one small and one large) and a small 2.5D milling machine. The small robot has a circular work envelope of 445 mm maximum horizontal reach and a maximum payload of 1.2 kg, while the milling machine has a working space of 400x250x50 mm (see Figure 1).
The industrial robot (see Figure 2) has the following specifications: Axes: 6, Payload: 130 kg, H-Reach: 2488 mm, Repeatability: ±0.5 mm, Controller: FANUC R-J3. This is a rather big and powerful tool that showcases several main features that are requested from “real industrial robots”. 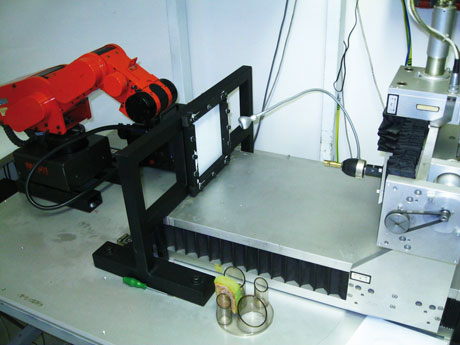 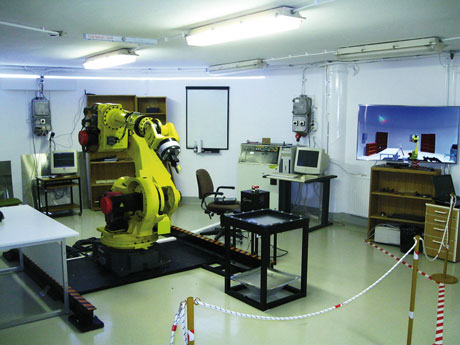 To get the laboratory up and running, we had to design and implement several tools, including: 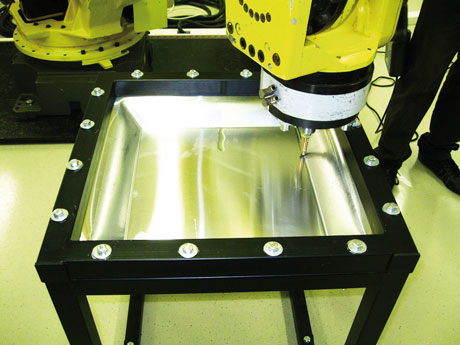 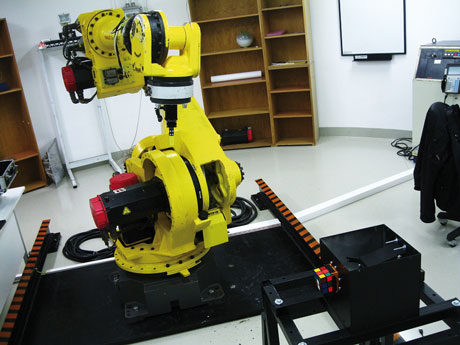 Recently, three experiments have been running on the laboratory’s three tools: Two deal with ISF, while the third is a kind of a “Hungaricum” to solve the magic (Rubik’s) cube.

Incremental sheet forming is a relatively new technology in sheet forming and there are various research questions still to address, for instance questions relating to thickness, stress, force and torque measurements on the sheet and on the tool.. We are performing several measurements to determine the effects of heating on a sheet, and to understand the relationships among the aforementioned variables. We started to deal with sheet forming within the framework of a successfully completed EU FP VI.project (“SCULPTOR”) in collaboration with German and Spanish partners and we have since become world wide accepted experts in this area of research.

In our first ISF experiment, we are experimenting with heating a polymer sheet from one side (using the small robot) and forming it with an appropriate tool from the other side (the milling machine). The processes in this setup can be started and monitored in VirCA (Virtual Collaboration Arena), a loosely coupled modular, 3D Internet based interactive virtual environment for collaborative manipulation of robots and other hardware or software equipment [2],[3]. The VirCA system has been developed within HUNOROB, a Hungarian–Norwegian research based innovation project. Optical measurements for sheet thinning and thermal behaviour investigation are started.

In our second experiment we are investigating ISF of metal sheets with the FANUC robot using a spherical edge tool and the specific frame to hold the sheet.

Our third experiment aims to control the robot and the optical box to solve the magic cube (Rubik’s) puzzle by learning it and then by turning it to its requested positions/colours with the FANUC robot. The light box assists in the learning of the initial colours of all six sides of the cube, and then the same hole on the side of the box assists in turning it. This experiment allows us to investigate different mathematical algorithms to solve the cube using different robot movements, such as sudden deceleration or acceleration, travelling slowly or fast, and making different, complicated turns.

In conclusion, the laboratory will be able to take part in international cooperation as a real and a virtual laboratory, continuing our experiments and collaborating with the leading Spanish and German laboratories.

Please contact:
György Kovács, SZTAKI, Hungary
Tel: +36 1 279 6140, E-mail: This email address is being protected from spambots. You need JavaScript enabled to view it.