The 6th ERCIM Workshop on eMobility, together with the MobiSense workshop, was held at the Petros M. Nomikos Conference Centre at Fira, Santorini Island. The joint workshop included an invited session, a keynote talk and eight technical talks based on papers, which were selected from eleven submissions. All papers were carefully reviewed and selected in a peer review process by the joint workshop technical program committee.

The workshop started with an invited session on delay- and disruption-tolerant networks, organized by the Space Internetworking EU project. This was a joint session with the 10th International Conference on Wired/Wireless Internet Communications (WWIC 2012). Various issues including energy-efficiency, security, cloud computing, and data streaming related to delay- and disruption-tolerant networks were discussed.

A keynote talk on Resilient Distributed Consensus was given by Prof. Nitin Vaidya (University of Illinois at Urbana-Champaign, USA). The talk discussed algorithms to achieve consensus, for example, to calculate average sensor values or synchronize clocks in decentralized wireless networks such as sensor networks with rather challenging wireless channel conditions.

Two technical sessions with the eight peer reviewed papers followed the keynote talk. The topic of the first session was routing. It included three presentations about current work in this area. Vasilios Siris (Athens University of Economics and Business, Greece) presented OptiPath, a system to select routes for vehicles based on available real-time information on travel times. The system can also be used for offloading data from cellular to WiFi networks. Enrica Zola (Universitat Politecnica de Catalunya, Barcelona, Spain) proposed a modification to the DYMO routing protocol in mobile ad-hoc networks. In particular, she proposed to use the beaconless routing protocol for route discovery. Finally, Geert Heijenk (University of Twente, The Netherlands) proposed a concept for vehicular networks to use tall vehicles for relaying packets for other smaller cars and presented simulation results. 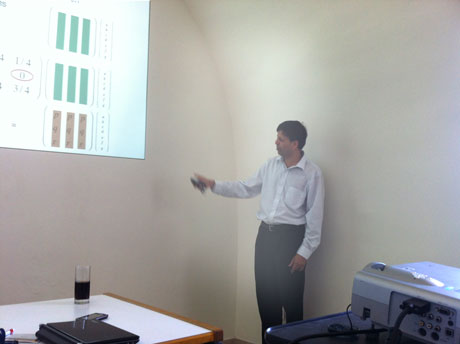 The second technical session was on various aspects of mobility. Torsten Braun (University of Bern) presented concepts for topology control mechanisms in highly mobile ad-hoc networks consisting of a set of small unmanned aerial vehicles. Remco Litjens (TNO Delft, The Netherlands) gave two talks in this session. The first evaluated the novel idea of Cooperative Multi-Point (CoMP) transmission in multi-operator networks; the second examined the feasibility of using the emerging LTE standard for communication in intelligent transportation systems (ITS). One conclusion was that LTE might meet most ITS requirements, except in cases where network capacity limits have been reached. Yun Won Chung (Soongsil University, Seoul, Korea) talked about adaptive energy-efficient location management in multi-tier wireless networks with end systems including both wireless LAN and cellular network interfaces. Finally, Desislava Dimitrova (University of Bern, Switzerland) presented work that is being conducted in collaboration with two Universities in Bulgaria. The paper presented measurement results for video transmissions in heterogeneous wired/wireless networks such as (W)LAN and 3G cellular networks.

The evening prior to the workshop a social event was held at a beach on Santorini Island. Local organizers, under the guidance of Vassilis Tsaoussidis (Demokritus University of Thrace, Xanthi, Greece), did a fantastic job of organizing this event. The PDF workshop proceedings (ISBN: 978-3-9522719-3-3) can be downloaded from http://wiki.ercim.eu/wg/eMobility/images/d/d1/ERCIM-WS2012-Proceedings-6.pdf.