The 17th International Workshop on Formal Methods for Industrial Critical Systems (FMICS'2012) was held on 27-28 August 2012 in Paris, as a satellite event of the FM'2012 conference. FMICS seeks to foster the dissemination of formal methods in industry by providing a forum where scientists and engineers can exchange their experiences in the development and industrial usage of these methods.

The workshop was chaired by Marielle Stoelinga (University of Twente, The Netherlands) and Ralf Pinger (Siemens AG, Germany). It attracted over 30 participants from nine countries, both from academia and industry. Thirty-seven papers were submitted, of which 14 were accepted for presentation at the workshop (a 38% acceptance rate). The keynote lectures were given by Dimitra Giannakopoulou (NASA AMES, USA) and Hubert Garavel (Inria Grenoble - Rhône-Alpes, France). The proceedings of FMICS'2012 were published by Springer Verlag as volume 7437 in the LNCS series. 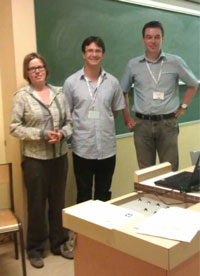 The best paper award for FMICS'2012 was granted by EASST (European Association of Software Science and Technology) to Nicolas Ayache, Roberto Amadio, and Yann Régis-Gianas for their paper entitled "Certifying and reasoning on cost annotations in C programs".

In addition to their involvement in FMICS'2012, several members of FMICS also contributed to the scientific program of FM'2012 as authors of papers, tutorials, and lectures at the Industry Day.

Please contact:
Radu Mateescu, Inria Grenoble - Rhône-Alpes and LIG
E-mail: This email address is being protected from spambots. You need JavaScript enabled to view it.{jcomments on}