The massive amount of digital data currently being produced by industry, commerce and research is an invaluable source of knowledge for business and science, but its management requires scalable storage and computing facilities. In this scenario, efficient data analysis tools are vital. Cloud systems can be effectively exploited for this purpose as they provide scalable storage and processing services, together with software platforms for developing and running data analysis environments. We present a framework that enables the execution of large-scale parameter sweeping data mining applications on top of computing and storage services.

The past two decades have been characterized by an exponential growth of digital data production in many fields of human activity, from science to enterprise. In the biological, medical, astronomic and earth science fields, for example, very large data sets are produced daily from the observation or simulation of complex phenomena. Unfortunately, massive data sets are hard to understand, and models and patterns hidden within them cannot be identified by humans directly, but must be analyzed by computers using knowledge discovery in database (KDD) processes and data mining techniques.

Data analysis applications often need to run a data mining task several times, using different parametric values before getting significant results. For this reason, parameter sweeping is widely used in data mining applications to explore the effects of using different values of the parameters on the results of data analysis. This is a time consuming process when a single computer is used to mine massive data sets since it can require very long execution times. Cloud systems can be effectively employed to handle this class of application since they provide scalable storage and processing services, as well as software platforms for developing and running data analysis environments on top of such services.

We have worked on this topic by developing Data Mining Cloud App, a software framework that enables the execution of large-scale parameter sweeping data analysis applications on top of Cloud computing and storage services. The framework has been implemented using Windows Azure and has been used to run large-scale parameter sweeping data mining applications on a Microsoft Cloud data centre. 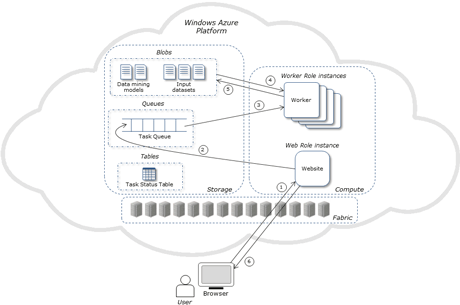 Figure 1 shows the architecture of the Data Mining Cloud App framework, as it is implemented on Windows Azure. The framework includes the following components:

The website includes three main sections: i) task submission that allows users to submit data mining tasks; ii) task status that is used to monitor the status of submitted tasks and to access results; iii) data management that allows users to manage input data and results.

Figure 2 shows a screenshot of the task submission section of the website, taken during the execution of a parameter sweeping data mining application. An application can be configured by selecting the algorithm to be executed, the dataset to be analyzed, and the relevant parameters for the algorithm. For parameter sweeping applications, the system submits to the Cloud a number of independent tasks that are executed concurrently on a set of virtual servers. 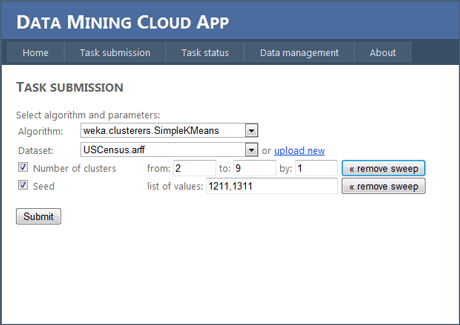 The user can monitor the status of each single task through the task status section of the website, as shown in Figure 3. For each task, the current status (submitted, running, done or failed) and status update time are shown. Moreover, for each task that has completed its execution, the system enables two links: the first (Stat) gives access to a file containing some statistics about the amount of resources consumed by the task; the second (Result) visualizes the task result. 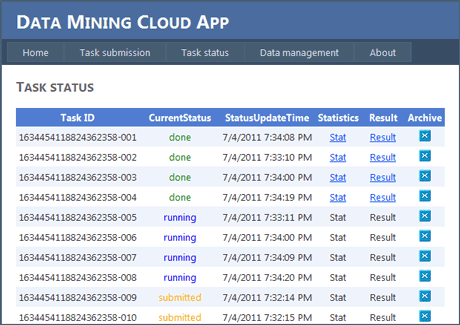 Other than supporting users in designing and running parameter sweeping data mining applications on large data sets, we intend to exploit Cloud computing platforms for running knowledge discovery processes designed as a combination of several data analysis steps to be run in parallel on Cloud computing elements. To achieve this goal, we are currently extending the Data Mining Cloud App framework to also support workflow-based KDD applications, in which complex data analysis applications are specified as graphs that link together data sources, data mining algorithms, and visualization tools.

Please contact:
Domenico Talia
ICAR-CNR and
DEIS, University of Calabria, Italy
Tel: +39 0984 494726
E-mail: This email address is being protected from spambots. You need JavaScript enabled to view it.