The first Fraunhofer Project Center (FPC) in Brazil had its opening ceremony on 9 March 2012 in Salvador, Bahia. The center is located in the Technological Park of Bahia, which hosts companies such as IBM, Portugal Telecom Innovation, and several big Brazilian companies. 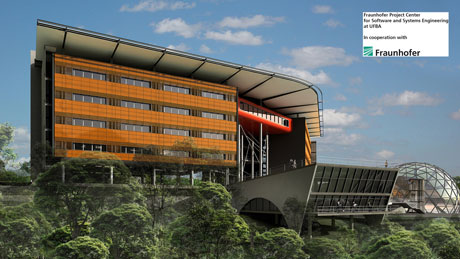 The new Fraunhofer Project Center will be active in the area of Software and Systems Engineering and will address topics such as innovative solutions for critical and/or large systems, mobile business applications, e-Government, and ambient assisted living. The center is a joint initiative of the Federal University of Bahia (UFBA) and the Fraunhofer-Gesellschaft in Germany. Brazil is the world’s eighth-largest economy and one of the fastest-growing major economies. The country has a sophisticated technological sector, developing projects that range from submarines to aircraft, and is also a pioneer in many fields, including ethanol production and deep-water oil research. In terms of software technologies, Brazil was the first country in the world to have fully automated electronic elections. The establishment of the Fraunhofer Project Center at UFBA will bring the Fraunhofer-Gesellschaft into the Brazilian market for software and systems technologies.