Ambient Assisted Living (AAL) has great potential to positively influence the lives of many people. But the impacts so far have been less than hoped, partly due to fragmentation of research efforts and the lack of a standardized approach for developers. To address this, we are forming AALOA (the AAL Open Association), and invite you to join in our efforts.

AALOA (AAL Open Association) is a growing community, officially launched during the AAL Forum held in Odense, Denmark, on September 2010, by researchers from different domains who had subscribed the AALOA Manifesto. The mission of AALOA is to create a shared open framework for developers, technology and service providers, research institutions and end-user associations to discuss, design, develop, evaluate and standardize common service platform(s) in the field of Ambient Assisted Living.

The AALOA Manifesto defines the rationale around which several European projects decided to join their efforts. It is a call for action addressing all stakeholders working in this area. The association is currently in the incubation stage, with the subscribers of the Manifesto organized into two groups: promoters and supporters. Promoters are interested in discussing and contributing to the organizational aspects of the association including the definition of the statutes, funding possibilities, liaisons with other organizations, definition of working groups and collaborations. Supporters are more focused on the scientific and technological challenges posed by AAL. Both groups together offer a good coverage of the multidisciplinary requirements needed for the development of AAL solutions.

A key point of the Manifesto is that transversal cooperation over diverse market segments is really needed to reach the AAL market breakthrough. The proposal is to develop an open and shared software infrastructure to be used as commodity by many stakeholders. To this end, AALOA is following a bottom up process with SMEs and research institutes aimed at reusing legacy software developed in national and international research projects. In order to encourage collaboration, AALOA is organized as a federation of projects, independent as far as design decisions and internal organization is concerned, but sharing infrastructure and resources to increase the visibility and adoption of their own findings. A second important (top-down) process will be the promotion of projects directly proposed by the governance body of AALOA. This process will be initiated as soon as we have achieved a consensus on the needed infrastructure, namely a common set of guidelines, software interfaces and basic components on top of which to realize AAL services. To this end the converging interest of many stakeholders will be pursued in a transparent and open way by shaping AALOA as non-profit organization. 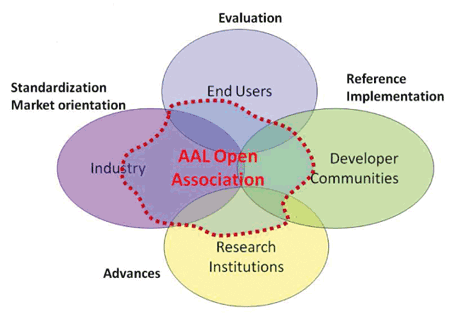 In this initial stage a number of IPR issues must be clarified before the code developed within the international research project can be published. However, a first set of projects has been already proposed. The most mature is probably ZigBee4OSGi, developed in the framework of the European FP6 project PERSONA. ZigBee4OSGi aims at integrating ZigBee based sensor networks with IP applications through a gateway based on the OSGi framework. It can be considered as a reference case for understanding the benefit of a community sharing the same technological infrastructure. Other members of AALOA working in the European FP6 project OsAMI have developed a similar solution based on Ember technology and will now join the ZigBee4OSGi project to extend the available solutions. ZigBee is an important technology for healthcare scenarios and future research projects as well innovative SMEs, providing an open and robust solution for sensor network integration. A community of 40 developers is following the Zigbee project and it is expected to be reused in other AALOA projects like HOMER (HOMe Event Recognition System) and universAAL an ongoing European FP7 project supporting the AALOA initiative.

At present AALOA initiatives are supported by the following European projects: BRAID (FP7), MonAMI (FP6), OASIS (FP7), OsAmI-Commons (ITEA2), PERSONA (FP6) , SOPRANO (FP6), universAAL (FP7) and WASP (FP6) and four European research institutes are actively promoting and allocating resources for AALOA: ISTI-CNR (Italy), Fraunhofer-IGD (Germany), ITACA-UPV (Spain) and SINTEF (Norway). Members of AALOA governing board are coordinating the Lecce Declaration - a call for a set of key measures to promote the market breakthrough of AAL, which will be sent as AAL community input to the high-level steering group preparing a pilot European Innovative Partnership on Active and Healthy Ageing.