To decrease traffic congestion and to facilitate a smooth traffic flow, researchers of the European C4C project developed new mathematics and computer engineering. The associated software made by IT company Trinité will be used by the traffic control centers of Rijkswaterstaat, the Netherlands' motorway authority. The C4C project (Control for Coordination of Distributed Systems), which is coordinated by CWI and in which both companies and research institutes took part, ended on 31 August 2011. Until now, the project was twice evaluated as excellent by independent reviewers. 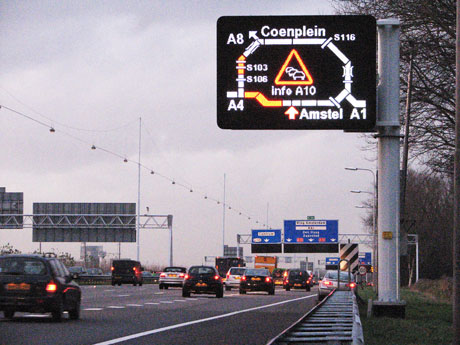 Information board displaying the location of congested traffic in red on the ringroad of Amsterdam (Source: Trinité).

The traffic control center of the 80 x 50 km motorway network around Amsterdam uses software based on mathematics, and in particular control theory. In the C4C project a new module (a scenario coordination module) has been developed that allows road operators to evaluate interactions of the different control measures like speed control, ramp metering, and routing advisories. Operators were very positive during evaluation interviews.

Other results from the C4C project include case studies, such as the control of underwater vehicles, automatic transportation of containers on a terminal, and control of complex machines. Autonomous underwater vehicles at the University of Porto were able to follow online specified paths and demonstrated cooperation. They were produced by the company Oceanscan. For formation flying of groups of those underwater vehicles, algorithms were developed and tested. For efficient container transport from the quay to a yard on the container terminal of PSA Antwerp, several algorithms were made that were shown to be effective, nonblocking (two parts of the system do not block each other), and efficient. Finally, supervisory control was developed for high-quality printers of Océ Technologies to control the operation of the machines.

The C4C case studies required the solution of several mathematical and computer science challenges. Coordination control of distributed systems was needed to control the joint operation, of, for instance, the different parts of the road network. The interaction of subsystems in a distributed system is handled by a subsystem called the coordinator. A software package - Ariadne – had been made, which provides computer programs that approximate reachable sets of hybrid systems based on the mathematically-rigorous theory of computable analysis. To allow researchers to efficiently use several software packages, other computer programs were further developed that convert the data of a model from the format of one program to that of another program (Compositional Interchange Format).

Coordination control of distributed systems was new developed for the project. In coordination control a coordinator directs the activities of two or more subsystems and takes care that the subsystems do not interfere with each other. For an example think of the coordinaton of the activities of several underwater vehicles. Developed was a control synthesis method for the controllers of the coordinator and of the subsystems. Coordination control was developed for linear systems, stochastic systems, and for discrete-event systems. In addition, a form of control was developed in which the different controllers at the local subsystems exchange information for the control actions. This form of distributed control with communication between controllers has so far received little theoretical attention. Coordination control has been applied to formation flying of underwater vehicles, airplanes, ramp metering on motorways, and for a paint factory demo of a control laboratory. The perspective is for more research on control of multi-level or hierarchical systems and on coordination control. For communication in distributed systems the concepts of directed information was further developed and applied to the characterization of capacity of communication channels.

The project has been financed by the European Commission (via the FP7 ICT Program; INFSO-ICT-223844) and started on 1 May 2008. The project was so far twice evaluated as excellent by three independent reviewers, in particular for the very effective relation between commercially-motivated technologically-advanced engineering problems and very innovative theory. The participants of the C4C project are: Centrum Wiskunde & Informatica (CWI) in The Netherlands, the Center for Research & Technology - Thessaly (Greece), Delft University of Technology and Eindhoven University of Technology (both from The Netherlands), the Universities of Cyprus, Gent, Porto, and Verona, and the companies Oceanscan - Marine Systems & Technology (Porto, Portugal), PSA Antwerp (Antwerp, Belgium), Océ Technologies B.V. (The Netherlands), and Trinité Automation B.V. (The Netherlands).