The 7th International Workshop on Security and Trust Management (STM’11) was held in Copenhagen 27-28 June 2011. It was co-located with IFIPTM’11.

This year’s program included two invited talks. The first, entitled “A Non-Standard for Trust”, was delivered by Stephen Marsh from the Communications Research Centre in Ottawa (Canada). His talk considered the proliferation of mobile technologies that are available to users in every day applications. Owing to the wide range of technologies available, it is difficult to ensure security and to apply traditional trust models in order to establish trust relationships among users.

The second talk was delivered by Audun Josang from the University of Oslo (Norway) with the title “Trust Extortion on the Internet”. He discussed the problem of user-perceived security risks associated with online commerce. Public perception of security risks may have a negative impact on the many businesses that rely on the Internet as a commercial platform. An alternative business model was developed with the aim of increasing the perception of security for users. Josang thus discussed the validity of auto signed certificates that are generally considered to provide proof of authenticity, although this is not always the case. This is forcing some companies to buy certificates produced by these certification authorities in order to ensure survival of their businesses.

As one of the main goals of the ERCIM STM Working Group is to promote the scientific growth of young researchers interested in the field of security and trust management, an award for the best PhD. thesis in the area has been established. The main objective of this award is to increase the visibility of young researchers inside the ERCIM scientific community as well as in the broader European community. The PhD thesis ERCIM award winner for this year is “Automorphic Signatures and its Applications” by Georg Fuchsbauer. 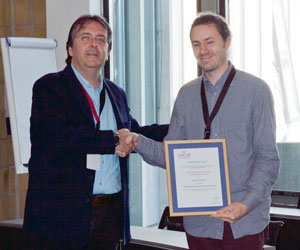 In addition to the invited talks, the technical program consisted of four sessions focusing on different topics such as Access Control, Authorization and Authentication, Trust Management or Architectures and Protocols. In these sessions 12 accepted papers, out of 37 submissions, were presented. The submissions, as well as the accepted papers, came not only from Europe but also from the United States and India.

This year’s workshop also included a panel on “New Paradigms on Trust”. The members of the panel were Audung Josang, Stephen Marsh, Michael Goldsmith, Carsten Rudolph and Ketil Stolen.

The General Chairs of this year event were Christian Damsgaard Jensen from The Technical University of Denmark and Aljosa Pasic from Atos (Spain). Catherine Meadows from the Naval Research laboratory (US) and Carmen Fernandez-Gago from the University of Malaga (Spain) served as programme co-chairs. The proceedings will be published by Springer in the Lecture Notes in Computer Science series.