The Netherlands took great pride in hosting the 52nd International Mathematical Olympiad (IMO) from 17 to 23 July 2011. IMO is the largest and oldest Olympiad for the exact sciences. Over 560 very talented young mathematicians from 101 nations visited Amsterdam to solve the hardest mathematical problems. Among them were 57 girls. 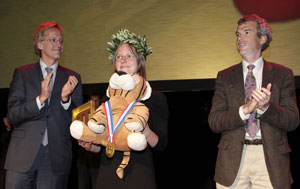 Eighteen year old German contestant Lisa Sauermann won IMO 2011 with a perfect score of 42 points. She received her fourth golden medal. This makes her the best participant in the history of IMO. The most successful teams were from China, the USA and Singapore.