Tidy City is a location-based scavenger hunt game for Android phones which allows everybody to create and publish their own content. During the game, players have to solve riddles that deal with historic or current topics and elements of the city. This enables players to learn about the past and present while exploring the city.

The game starts with the riddles scattered around in the environment which the players can see on a map view on the mobile phone. They now need to walk over to the riddle in order to collect it. This enables them to read a short description and see a photo. From this information the players have to figure out two things:

1) What is the object in question?
2) Where is this object located in reality?

The subjects of the riddles might include statues and monuments, architecturally interesting buildings, historical sites or anything else conceived of by the mission creator. Sometimes the solution to a riddle is very simple; often however, the players need to think hard and walk around the city with their eyes open to come up with the solution.

When the players think they are standing at the correct location (evaluated by GPS), they can try to solve the riddle, and if they do so they earn points. When players solve a riddle a new description and image for the riddle become available which give the players further information about the riddle that they just solved. When the players have collected and solved all riddles of a given mission, they have won the scenario.

Creating a new mission for Tidy City is an easy process, consisting of two steps. At first, the mission author uses the Tidy City Scout app for Android phones and walks around the city in order to get inspiration, take photos and record GPS positions. This data can then be uploaded to the server where it can be accessed from a web interface. Here, the riddles can be structured and filled with more detail. If the user is happy with the result, the mission can be published and becomes available for all players of Tidy City. 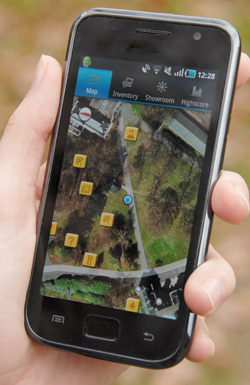 Together with the newspaper publisher in Waiblingen, Germany, (ZVW), Tidy City was staged for local families in March 2011. The mission for this event was created with the help of four local kids, aged 10 to 12, who, under guidance, used the authoring tools to create engaging riddles about their home town. In this case the riddles included, for instance, questions about the typical chimera that are found on some of the houses in the old town, an art piece on the main square, the medieval clock tower of the city hall and a historic fountain.

Creating new missions for Tidy City is an interesting way to promote cultural heritage. As a mobile game that is played outdoors, it gets the players directly to the relevant areas of the city and motivates the exploration of the surroundings. This lets the players deal with cultural heritage in an interactive and playful way. This, in addition to the fact that the creation of new missions is very simple, allows Tidy City to be used in a large range of different contexts and makes it appealing to diverse user groups, eg tourists, students, teachers and families.

Tidy City and the Tidy City authoring tools are being developed as part of the German-French research project “TOTEM – Theories and Tools for Distributed Authoring of Mobile Mixed Reality Games”. The three-year project started in September 2009 and the research is undertaken by Fraunhofer Institute for Applied Information Technology in Sankt Augustin, Germany, and Telecom & Management SudParis in Evry, France. The game design for Tidy City was conceived by Michael Straeubig of i3Games. The goal of the project is to provide a flexible and powerful framework for the creation of mobile mixed reality games, ranging from experienced users to novices. The TOTEM software consists of several mobile and web-based applications that provide the necessary infrastructure for the creation of such games. Furthermore, a variety of such games is being created during the course of the project to be evaluated and analyzed. The work in the project is funded by the Programme Inter Carnot Fraunhofer from BMBF and ANR (grant 01SF0804).