The SeARCH research project (Semi-automatic 3D Acquisition and Reassembly of Cultural Heritage) brings together archeologists and computer scientists with one unique objective: the virtual reassembly of broken artifacts, and especially the broken statues that were surrounding the lighthouse of Alexandria. The gathering of researchers of these two fundamentally different scientific origins makes it possible to combine expert archeological high-level knowledge with the power of computer graphic visualization techniques and geometry p rocessing algorithms. The integration of both disciplines is achieved by designing efficient human-computer interaction techniques that use semi-automatic geometry-driven acquisition, visualization, and reassembly techniques.

Figure 1: Restitution of parts of the lighthouse and monuments raised beside it (© Isabelle Hairy - CEAlex).

Archeological artifacts are often broken into a large number of fragments, and, when reassembling the fractured objects, cultural heritage professionals are confronted by huge three-dimensional puzzles. The reassembly of the fragments is generally done manually, but this task can be very tedious, and in some cases impossible.

This is particularly true for the broken colossal statues that were surrounding the Lighthouse in Alexandria built in the 3rd century BC. The fragments were deteriorated by erosion, weathering, and the earthquakes in the 10th and 14th century AC. Most of the fragments are still underwater in the Mediterranean Sea, in a spectacular submarine archeological site of about one hectare in area next to Alexandria's Eastern Harbor, and only a few fragments have been brought to the surface. Due to the availability of fragments at different locations with varying access policies, digitally acquiring the fragments and reassembling the corresponding 3D models virtually is probably the only feasible solution to reason about the past.

With this common objective in mind, in 2009, the SeARCH project was born, a three year project funded by the French Agence Nationale de la Recherche (ANR). The SeARCH project strives to develop semi-automatic techniques for the acquisition, visualization, and reassembly of the 3D models. This project gathers the experience of four research partners, specialized in Archeology (Centre d'Études Alexandrines in Alexandria), in operational 3D scanning for Archeology (Ausonius Archéovision at Bordeaux University), in data processing for Computer Graphics (INRIA Bordeaux Sud-Ouest), and in Human Computer Interaction as well as simulation of physical phenomena (ESTIA Research).

In this first half of the project, we identified three major achievements: first, the digital acquisition of the fragments of the surrounding statues, even those that are still underwater. Second, the expressive visualization that highlights details of the acquired fragments that are sometimes invisible to the human eye when inspecting the real fragments. Third, a semi-automatic reassembly technique that allows an archeologist to drive sophisticated geometry processing algorithms in order to find the most probable reassemblies.

Fragment acquisition
The first step in the virtual reassembly is the on-site digital acquisition of the fragments in order to obtain 3D models. From the 3000-plus available fragments on the archeological sites in Alexandria, the cultural heritage professionals identify those with the highest reassembly potential. Instead of using traditional 3D laser range scanning that cannot be used underwater, our acquisition process is based on photogrammetry and is quite simple: we take about a hundred photographs per fragment covering the entire surface, with much less infrastructural effort than traditional techniques. Then, salient feature points are identified automatically in every photograph, and the correspondences of the same feature in different photographs are detected. This makes it possible to infer the 3D positions of the features, and hence to reconstruct the entire 3D model with submillimeter accuracy. With this acquisition protocol, we have even been able to reconstruct the immersed fragments during an underwater acquisition campaign. So far, we have reconstructed 15 fragments from the submarine site, and 34 fragments from three different museums.

Figure 2: An underwater photographer during the 3D acquisition, and the reconstructed 3D model.

Expressive visualization
Exploring the physical fragments on-site is sometimes difficult due to their size and the lighting conditions, especially for underwater fragments. Conversely, the 3D models can be inspected virtually in laboratory conditions. We have developed novel expressive visualization techniques that use differential geometry to find the best lighting conditions to highlight all the features from the fragments. In our context, this is particularly important since we have to distinguish between the features of the fragment and the undesired effects from the century long suffered erosions. Our visual enhancement techniques stress features at different scales, ranging from vast ridge and valley lines to precise hand-made stone engravings. Since all our techniques operate in real-time on the graphical processing unit after a short preprocessing step, the 3D fragments can be comfortably explored by cultural heritage experts, sometimes revealing more detail than inspecting the physical fragments on-site. 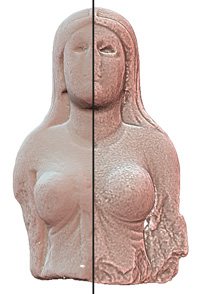 Semi-automatic reassembly
The availability of accurate 3D models allows the archeologists for the first time to study the fragments coming from different locations in one coordinate frame. After visual exploration of the fragments, potential reassembly candidates are identified. For the pairwise virtual reassembly, we designed ArcheoTUI, an easy-to-use tangible user interface that makes it possible to relatively position the two fragments as if they were in the user’s hands: in each hand, the user manipulates an electromagnetically tracked prop, and the translations and rotations are directly mapped to the corresponding virtual fragments on the computer screen when a corresponding foot pedal is pressed down. During the manipulation of the fragments, we provide feedback to the user in real-time by showing the geometric error of the reassembly. Furthermore, we provide a visual representation of the locally best match that is computed by optimizing the geometric compatibility of the two fragments with respect to the fragments’ positions and orientations. Hence, the virtual fragments virtually “snap” to the locally optimal best match. 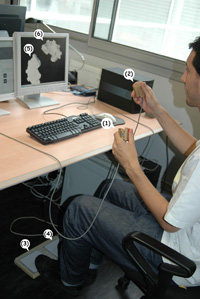 Future work
For the remainder of the project, we will continue to study the fragments with the challenging goal of finding new archeologically plausible reassemblies. We are also trying to physically model the phenomena that happened to the fragments during the deterioration. Furthermore, we are striving to develop a tangible interaction tool so that archeologists can easily make hypotheses about deformations.

Most of the members of the SeARCH project were involved in establishing V-MusT.net, a European Network of Excellence dedicated to Virtual Museums (2009-2013). Motivated by our attractive application case, we are currently planning an exhibition at a museum to show the results of the SeARCH project.

This work was supported by the ANR SeARCH project, grant ANR-09-CORD-019 of the French Agence Nationale de la Recherche.