by Douglas Pritchard and Daisy Abbott

Since 2009, the Digital Design Studio at the Glasgow School of Art, Historic Scotland and the CyArk Foundation have been involved in a five-year project to create precise 3-dimensional documentation of Scotland’s five UNESCO World Heritage Sites and five international heritage sites. The project incorporates an extensive use of aerial lidar, terrestrial laser scanning, HDR photography, 2D and 3D visualization software and other technologies.

The objectives of the Scottish Ten project (http://www.scottishten.org) are to record important historical sites for the benefit of future generations in Scotland and overseas, test emerging survey and documentation technologies to see how they can be employed in the heritage sector, and provide precise digital media to site managers to better care for the heritage resource.

Four of the overseas sites have been selected based upon Scottish Government international objectives in North America, Japan, India and China. Internationally, the projects encourage the exchange of techniques and best practices between the various agencies and build cultural connections. At the end of each international project, all of the data are given over to the site managers.

The acquired data from the Scottish Ten sites will be used for a number of purposes - from conservation practice to education programme development. Measured drawings and intensity values generated by the laser scanners will enable the Scottish and international site managers to better identify problems and quantify any decay of the monuments. At the same time, the data will be used to enhance interpretative and education programmes through the use of dimensionally accurate and photorealistic 3D modelling. This will provide unprecedented virtual access to the sites that may be restricted or closed to the public.

Of the Scottish UNESCO sites, New Lanark and Neolithic Orkney have been thoroughly documented and modelled. Both sites were extensively terrestrially laser scanned and digitally photographed. The documentation of the world heritage zone within the city of Edinburgh is currently under development. A lidar-based 3D model has been recently completed and the terrestrial scanning will begin later this summer. Given its size and the number of buildings within the World Heritage Site, this is an ambitious undertaking and the project is expected to be completed by the end of 2012.

The planning for the fourth site, the islands of St. Kilda, is well underway. The combined 6 member Glasgow School of Art/Historic Scotland team will be documenting the Village Bay settlement area and other parts of the archipelago during the early summer. Weather permitting; the site documentation work will last for two weeks. The Antoine Wall project is scheduled to begin in 2012.

Internationally, the Mount Rushmore National Memorial in South Dakota was thoroughly documented in May 2010. The project was challenging, in part due to the terrain but also because of erratic weather conditions. To capture the entire surface area of the sculpted monument, a custom-manufactured rig was used to position the laser scanner on each of the four Presidents’ faces. The procedure was physically demanding and relied heavily on the expertise of the US Parks Technical Ropes Team. 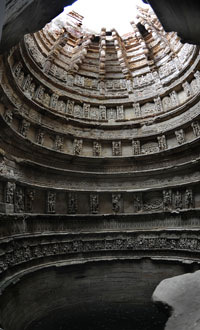 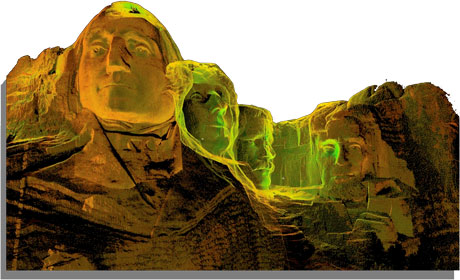 The Rani ki Vav (Queen’s Stepwell) in Gujarat, India is intended as the next international heritage site. The well was built in 1050AD and consists of six stepped terraces into the ground. The walls are adorned with over 400 Hindu sculptures. The team will begin documentation work at the end of September 2011.

On the 21st and 22nd September the Scottish Ten project will feature prominently at the 2011 Digital Documentation Conference in Glasgow (http://www.digitaldocumentation.co.uk/). In November 2011, the results from St. Kilda project will be showcased at the UNESCO Remote Access Conference in Edinburgh.

Please contact:
Douglas Pritchard
Glasgow School of Art, UK
Tel: +44 141 566 1452
E-mail: This email address is being protected from spambots. You need JavaScript enabled to view it.