We present a set of integrated tools designed and developed for the digital acquisition and structural analysis of historical monuments and buildings.

The assessment of monuments requires various types of expertise and technologies. The St@rt project (Sciences and Technologies for the Artistic, Architectural and Archaeological Tuscan heritage), funded by the region of Tuscany (Italy) for the three year period 2007-2010, aimed at integrating different research and administrative expertise in the field of cultural heritage. The project’s activities focused on the 13th century "Rognosa" tower in San Gimignano, included in the Unesco World Heritage List in 1990, as a case study.

We generated a finite element mesh of the Rognosa tower using a three-dimensional digital model of the tower and the surrounding buildings, realized by a RIEGL time-of-flight (TOF) laser scanner. The tower’s surface was acquired from four different positions, each selected to provide the best possible coverage of one side and, at the same time, a good view of an adjacent side, in order to facilitate the alignment process and provide coverage of all details from multiple angles.

Figure 1: Acquisition of the tower’s geometry by means of a TOF laser scanner (on the left),
3D digital model of the Rognosa tower and the Cathedral Square (on the right).

Additional scans were carried out to acquire the facade of the building encompassing the tower and the front arcade overlooking the square, where a portion of the tower’s base is visible. The model has been created by processing the laser scanner data using MeshLab, an open source software developed at the Visual Computing Lab and other geometric processing tools specifically designed to build a 3D model starting from a set of acquired range maps. Acquisition of the tower’s inside geometry is impossible because it is only accessible via an internal staircase and the view from below of its highest portion is partially hidden by wooden floors. Thus, information about the geometry of the inner part of the tower has been obtained via classical measuring methods.

Although masonry towers represent an important part of the world’s ancient architectonic heritage, their mechanical behaviour is, as yet, not well known. In fact, their response to dynamic actions is nonlinear and heavily dependent on the construction techniques utilized. Moreover, they are characterized, even in the static case, by high compressive stresses that can cause additional damage in correspondence to openings or other geometrical irregularities.

The mechanical behaviour of the tower was studied using the finite element code NOSA, developed by the Mechanics of Materials and Structures Lab in which masonry is assumed to be a nonlinear elastic material with zero tensile strength and bounded compressive strength. The behaviour of the tower, subjected to its own weight and to time-dependent loads that model seismic excitations, was investigated. 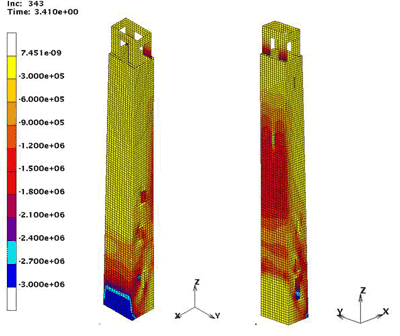 Figure 2: Dynamic analysis: distribution of the stress Tzz (Pa) on the external surface of the tower at time 3.41 s.

Figure 2 shows the distribution of stress Tzz on the external surface of the tower at time t = 3.41 s. The maximum crashing damage is recognized at the tower’s base, while the maximum values of the fracture strain tensor are reached in the highest part of the tower, focused near the openings and in correspondence with the bell chamber.

Bell towers typically exhibit a certain vulnerability in correspondence with the bell chamber, which is the structure’s highest element and is usually built separately from the rest of tower’s structure. Figure 3 shows the behaviour of the bell chamber pillars of the Rognosa tower during the earthquake. The relative x-displacement of the top of the bell chamber with respect to the top of the tower is plotted vs. time. For the sake of comparison, the displacement corresponding to the analysis performed assuming the structure made of a linear elastic material, is reported. 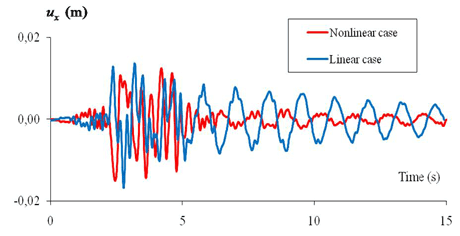 The study highlights the importance of developing integrated procedures involving technologies of both visual computing and computational mechanics to obtain realistic models of monumental structures in complex architectural contests.