Researchers from CWI, the University of Antwerp, ETH Zürich, and the Swiss Federal Laboratories for Materials Science and Technology, have developed the first practical method to reconstruct the 3D position of all atoms inside a nanoparticle. Their breakthrough required a combination of statistical image modelling, discrete tomography, and state-of-the-art electron microscopy. The research, published in Nature on 2 February 2011, will allow researchers to better understand the three-dimensional structure of materials. This is important for the development of new catalysts, solar cells and better LED lighting.

This project employed the use of tomography, an imaging technique which deals with the reconstruction of 3D images from a series of 2D projection images, acquired from a range of angles. The image reconstruction task is then modelled as a mathematical inverse problem, which can be solved using techniques from analysis and linear algebra. In the case of atomic resolution imaging, this problem is highly challenging, as only a few projection images – typically less than four - can be recorded. As a result, the reconstruction problem is highly ambiguous: there exist many different atomic configurations sharing the same projections.

The key to solving the reconstruction problem lies in the incorporation of prior knowledge within the reconstruction algorithm. In a crystal, the atoms are not randomly distributed: they closely follow a regular lattice structure. Conventional tomography methods model the image as a greylevel distribution, corresponding to the density of the material. At the atomic level, nature is actually discrete: an atom is either absent or present at a particular location, but there cannot be half an atom. Joost Batenburg, researcher at CWI, applied new combinatorial reconstruction algorithms for discrete tomography, which take into account prior knowledge of the lattice structure and the discrete nature of atoms. Using this knowledge, just a few projections are often sufficient to accurately reconstruct the atomic configuration of a nanoparticle. 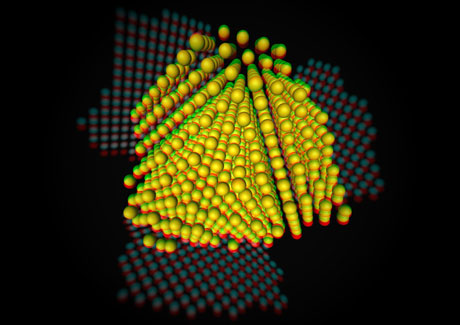 Figure 1: Visualization of the three-dimensional structure of a silver nanoparticle at an atomic level. Sophisticated measurement and reconstruction techniques are applied to images obtained with one of the most powerful electron microscopes in the world.

Nanoparticles are structures consisting of only a few atoms up to thousands of atoms, ranging in size from one to 100 nanometres. Nanoparticles often have physical, chemical, or biological properties that are very different from the same materials at larger scale. For example, gold changes colour from yellow to red as the size of the gold particles is reduced to a few nanometres. The often unexpected properties depend on the exact three-dimensional configuration of all atoms within the nanoparticle. It has, therefore, been a long-term challenge to zoom down to the atomic level. For the first time, scientists have managed to make this dream come true .

The researchers applied their algorithms to images of a silver nanoparticle obtained with one of the world’s most powerful electron microscopes. By imaging this particle from different directions, two dimensional projection images were acquired at atomic resolution. To use these images for discrete tomography, an intermediate step was required: atom counting. Sandra van Aert from the University of Antwerp applied sophisticated statistical models to count the integral number of atoms in each projected column. The resulting discrete projections were then used as input for a discrete tomography algorithm, resulting in the atomic resolution 3D reconstruction.

International team
The research was performed at the EMAT laboratory (Electron Microscopy for Materials Science) of the University of Antwerp, under the guidance of Sandra Van Aert and Gustaaf Van Tendeloo, and at CWI in Amsterdam, under the guidance of Joost Batenburg. The research team also included Rolf Erni and Marta Rossell, scientists from Switzerland who acquired experimental images with a prototype of the new Qu-Ant-EM electron microscope which has been in use in Antwerp since June 2010.

The research conducted by this team pushes the limits of our perception and will promote further research on nanoparticles. The ability to use new algorithms to visualize the three-dimensional structure of nanoparticles at the atomic level will open up new possibilities in the development of innovative materials with fascinating and revolutionary properties. One will be able, for example, to acquire all necessary knowledge to understand the structure and activity of catalysts and to design optimal catalysts, for specific uses, for instance in the automobile industry. Furthermore, knowledge about the atomic structure holds promises for the development of more efficient solar cells, computer chips, versatile lasers and brighter LED lighting.