In an applied research project, called CrowdCulture, which was founded around the question of “How would we distribute cultural funding if we invented that concept today”, the Swedish Institute of Computer Science (SICS) is working together with a communication company in developing new technology to combine private and public funding for the creation of a new culture. In Sweden today, most cultural investments follow a top-down political logic. One larger aim of this project is to engage more people to contribute and participate in the cultural development, and consequently delegate decision-making power to a broader public with different references and quality criteria.

We are also addressing new ideas around different crowdsourcing concepts and techniques, knowing that crowdsourcing and working with experts are equally qualitative methods in many fields - take for example the much talked about article confirming similar standards of quality of Wikipedia and The Encyclopedia Britannica. Furthermore, we know that micro funding is a great tool in creating local empowerment and initiating important processes of change; it was not without reason Muhammad Yunus got the Nobel prize for his practice with the Grameen Bank in Bangladesh. Furthermore, we believe that arts and culture respond, in their own ways, to the circumstances in which society finds itself. Considering this, we think that funding mechanisms should respond to society's circumstances as well, instead of to the logics of top politicians only.

Private symbolic funding steers larger sums
The core of the CrowdCulture project is a web based platform which allows people to invest small monthly sums in any available cultural projects they choose. Currently, the system allows an individual to contribute as little as €5 per month. An individual person’s investment is spread out over time, whereby funding trickles out per time unit according to which cultural project the giver choses to support at the moment. However, as a twist on crowdfunding, the participating individuals’ support for different projects will have a leveraging effect, diverting a potentially much larger sum from public funding or other contributing organizations to the supported projects.

At any time there can be any number of “passive” contributing organizations and companies, which donate larger sums to the system. This funding is not directed towards particular projects, but can be tagged to support certain categories of cultural projects. Since a lot of the parameters of the system -such as the number of individuals, number of projects, the amount of contributed money, which project the individuals support - are always changing, the leveraging effect is of course also always changing in this highly dynamic real-time system. Those projects that meet their budgetary targets within a given time frame are awarded the requested funding.

Encouraging new cultural initiatives
In addition to funding distribution, the service allows a paying member to suggest a new project they would like to work on and submit it to the crowd to decide if it is suitable. The site also allows for, and is largely marketed by, connections to the social web, as well as in-site crowd participation mechanisms. 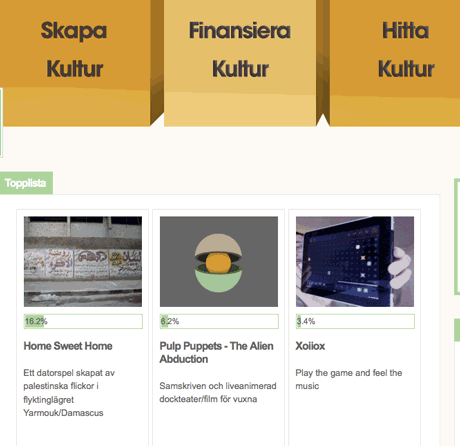 Screenshot of the CrowdCulture application.

In this first stage mostly more conventional crowd participation techniques were used while examining different crowdsourcing mechanisms. The continuation of this work applied to a similar ‘democracy in action’ area would also look at the relationship between crowd wisdom and the rest of the democratic mix, as well as community support for producers. This very young area has caused a lot of discussion in the democratic arena in general the last couple of years, highlighted by the quite diverse opinions in the media articles this project alone has generated.

The CrowdCulture technology is being developed by the Swedish Institute of Computer Science (SICS), in cooperation with concept developer Fabel Kommunikation AB, supported by the City of Stockholm, and the Swedish innovation agency VINNOVA.

Please contact:
Pär Hansson, SICS, Sweden
E-mail: This email address is being protected from spambots. You need JavaScript enabled to view it.