fet11, the European Future Technologies Conference and Exhibition 2011, held in Budapest 4-6 May 2011, was the second edition of a new forum dedicated to frontier research in information and communication technologies. fet11 was a unique conference on visionary, high-risk and long-term research in information science and technology. Featuring an exceptionally broad range of scientific fields, the event seeded new ideas across disciplines that will reshape the future.

The conference, jointly organised by ERCIM, SZTAKI and the Future and Emerging Technologies (FET) Units (Open and Proactive) of the European Commission, exceeded all expectations. It attracted more than 1000 participants and received huge media coverage. It involved key policy makers, and featured a mix of seven keynotes, a panel discussion, 30 scientific sessions, 100 poster presentations and a science cafe with energy-packed ignite-style presentations. Hands-on exhibitions with 30 booths ran throughout, in parallel to the conference, showcasing the latest research developments in future and emerging information technologies.

fet11 also marked the official launch of the FET Flagship Pilots by Neelie Kroes, Vice President of the European Commission and Commissioner for the European Digital Agenda. FET Flagships are large-scale initiatives that aim to achieve a visionary technological goal over 10 years with a budget of up to one billion Euro for each Flagship. To prepare the launch of the FET Flagships, six Pilot Actions were funded for one year starting in May 2011. In the second half of 2012 two of the pilots will be selected and launched as full FET Flagship Initiatives in 2013 (see http://cordis.europa.eu/fp7/ict/programme/fet/flagship/). 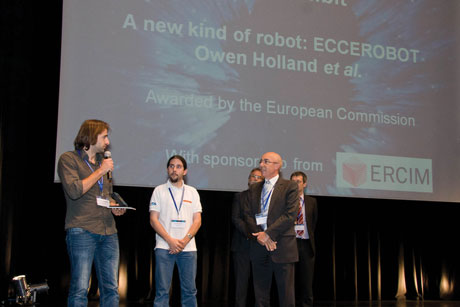 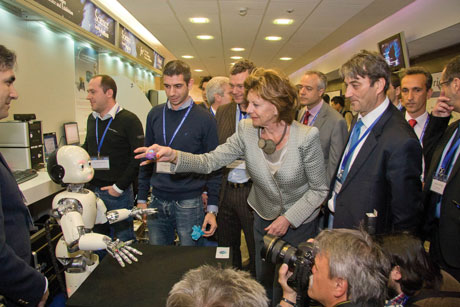 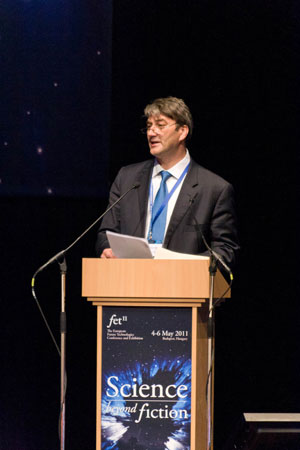 More than a traditional scientific conference, fet11 was a unique intellectual event which created an atmosphere of excitement for the opportunities presented by FET-type research in Europe.

Recorded sessions
All plenary sessions (keynotes, panel discussion, political adresses, closing ceremony) were recorded and can be viewed via the fet11 website.

Awards
The participants were invited to vote for the best exhibition and poster. The following winners were awarded by the European Commission with a beautiful glass sculpture made by the Hungarian artist Laszlo Lukacsi and sponsored by ERCIM:

Proceedings
The scientific conclusions and perspectives from the keynotes, topical sessions, and posters are being published by Elsevier as proceedings entitled “fet11essence”. The proceedings will be freely available from the fet11 website.