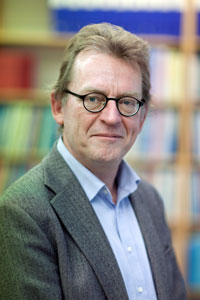 Prof. Dr. Jos C.M. Baeten will be the new general director of CWI in Amsterdam. The General Board of the Netherlands Organisation for Scientific Research (NWO) confirmed his appointment on Monday 6 June. On 1 October 2011 Baeten succeeds the current general director, Prof. Dr. Jan Karel Lenstra, who will continue working at CWI as a senior researcher until his retirement in 2012. Baeten obtained a PhD in mathematics in 1985. Since 1991, he has been affiliated with the Eindhoven University of Technology as Professor of Theoretical Computer Science, and since 2010 as Professor of Systems Engineering. The Board of CWI describes Baeten as a very prominent researcher, with an excellent understanding of both mathematics and computer science, and extensive experience in attracting external funding. He has been successful in contract research and valorization and is a very experienced manager. Jos Baeten will succeed Jan Karel Lenstra as CWI representative for ERCIM.