Self-Adaptation (ie the ability to react to changes in the environment) is becoming a basic architectural concern for complex computational systems. However, it is very difficult to provide this feature by conventional means. Inspired by the behaviour of biological systems (and stem cells in particular) we define a new approach to provide multi-agent systems with a dynamic structure, effectively transforming them into self-organizing architectures.

Agreement Technologies (AT) and Agreement Computing refer to methods, techniques and tools for the development and deployment of next-generation intelligent information and software systems. These terms describe certain large-scale open distributed systems whose semi-autonomous elements interact with each other based on the notion of agreement – where these elements, often called agents, negotiate to reach both their individual and system-wide goals.

We have developed the Shifter approach as part of the AT sandbox, that provides a system with the capability of self-adaptation, ie the ability to adapt its behaviour to changes in the environment. This is a very relevant and powerful feature, but unfortunately it is also very complex and difficult to obtain by usual computational means. Just like agreements themselves, adaptations cannot be based on a closed predefined strategy – they must be emergent. As a result, the architecture of the system must itself be emergent, so we conclude that it defines a self-organizing system.

In the context of AT, the central idea is to use intelligent-based technologies to provide powerful features to conventional applications. Therefore the approach starts with a classic AI-based technology, that of multi-agent systems (MAS). However, agents are only the basic foundation – the system is setup to hide these details from the final user. In fact, the functionality is presented in the form of services.

The management of MAS is essentially a coordination problem; and several researchers have provided an enhanced approach to that problem including the notion of organizations. These are essentially structured groups of agents, which join together to achieve or maintain some long-term goal by applying a set of coordination mechanisms. In this respect, a core feature in open systems is the ability to change between coordination strategies on-the-fly, so as to successfully adapt behaviour of the system and its elements to changing situations.

The Shifter approach takes inspiration from biological systems – and in particular from cellular systems – to go beyond that setting. The core of the comparison is to consider any agent (our shifter) as a stem cell: a powerful computational unit, able to perform a concrete functionality once it has been instructed to do so. Just like stem cells, in the beginning an agent is a neutral module, capable of transforming into whatever the system requires; once they have acquired a function, they turn into conventional cells.

We are specifically interested in the emergence of structures – ie the equivalent of the formation of biological tissues. Just like stem cells acquire their functions by contacting the cells of a certain tissue, agents learn by interacting with other agents. 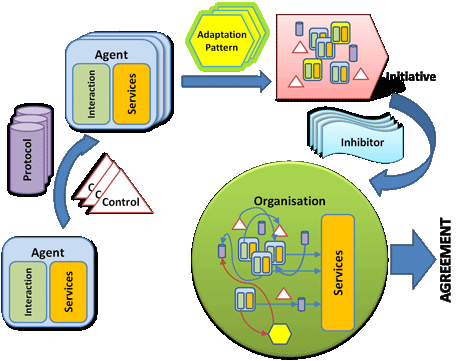 Figure 1: Lifecycle of a self-organizing structure – from a single agent to a full organization.

Figure 1 shows the lifecycle of our self- organizing structures. The cycle begins with a single agent, capable of performing certain interactions and with the potential of exporting some services. This agent reaches the system, and initially it does not belong to any organization. However, it finds a number of predefined controls (limiting what it is able to do) and protocols (enabling it to interact to other entities). These elements “guide” the agent’s interaction and enable it to maintain structured conversations with other agents, composing informal groups of agents.

At some point, an external change occurs, and the system must react with an adaptive behaviour. Of course, this is the functionality that must trigger the formation of our self-organizing structures. To be able to achieve the desired reaction, the system is provided with a number of adaptation patterns. These are neither closed strategies nor full descriptions of a reactive behaviour, but partial definitions of elements and relationships, which include enough information for an agent to learn how to perform a certain fine-grained, but relevant, behaviour. Therefore, under the influence of an adaptation pattern, certain agents within the group acquire specific functions, and begin to form an actual structure: this is what we call an initiative.

The analogy is particularly relevant here: if the process continues with no additional control, cells continue growing, and evolve into cancer – however, metastasis is avoided by reacting to existing inhibitors. Similarly, when the initiative is already fulfilling all the required functions – every service is being served by some agent – our inhibitors transform the initiative into a full organization.

These organizations are adaptive by formation, and are themselves able to evolve and participate in larger agreements – which could trigger the formation of yet another composite organization. In summary, the process guarantees that the result is indeed an adaptive agreement architecture.