by Giuditta Franco and Vincenzo Manca

A research project at the University of Verona concerns the synthesis of a minimal cell by means of a P system, which is a distributed rewriting system inspired by the structure and function of the biological cell. We aim to define a dynamical system which exhibits a steady metabolic evolution, resulting in self-maintenance and self-reproduction. Metabolic P Systems, shortly called MP systems, represent a specific class of P systems which is particularly promising to model a minimal cell in discrete terms

The idea of synthesizing a 'minimal cell' by mathematical and engineered tools is not new in the literature, namely there is a recent trend in synthetic biology towards building a synthetic endomembrane structure, whose compartments (usually formed by liposomes) contain the minimal components required to perform the basic function of a biological cell (essentially self-maintenance and self-reproduction). A self-replicating metabolic system requires a synchronization of its internal dynamics in such a way that the metabolic activity is maintained, while the system exchanges matter with the environment, grows, and replicates its own membrane structure together with the contained metabolic processes. We aim to model such a dynamical system by using a P system; a computational model inspired by the cell.

This research may be framed within the context of membrane computing models, an area of molecular and cellular computing, and aims to build a self-replicating metabolic membrane system where molecular and cellular peculiarities are represented in symbolic and algorithmic terms. It was started at the beginning of the 2011, and its purpose is to develop an understanding of the general rules governing the synchronization of genomic duplication and membrane reproduction. This is known as a "top-down" approach to synthesize minimal forms of life starting from general principles of structure and function organization (matter conservation, anabolism and catabolism, species distribution, enzymatic control, autopoiesis). In principle, this approach has an experimental counterpart, and it can be classified as a constructivist approach for scientific knowledge, according to Feynman's famous motto “What I cannot create, I do not understand”.

The techniques employed in this project are a combination of membrane computing and metabolic P systems, statistical regression and correlation methods, numerical approximation and time series analysis techniques. The research is intended to have a mathematical/symbolical – computational orientation, and the main expected product is a Metabolic P model of a minimal cell. The research project will be conducted at the department of Computer Science of the University of Verona, and there are involved both the authors together with some members of the MNC group

Regarding future activities of this research, we have plenty of ideas and dreams; we are limited only by our imagination. Once we have a self-replicating MP system which exchanges matter with the environment to maintain its internal metabolic dynamics, both the role of energy in such an exchange and a form of adaption to the environment could be studied, by analyzing the consequent reactions of the system to different (even energetic) stimuli. Receptivity and reactivity should be investigated to better understand the robustness of the single cell and of cell networks. Communication and interaction among (synthetic and/or real) cells is a crucial task to model morphogenesis (e.g., embryogenesis) and tissue organization. From the viewpoint of a tissue system, the process of mitosis of each single cell is limited in time; single healthy cells do not live forever but tissues do, while new cells rise and old ones die. Tissues stay alive under certain boundaries (density, dimension), while single cells produce new cells and eventually die. The cellular and tissue systems are tightly interrelated but have quite different dynamics and function.

The study of phenomena such as cell differentiation and speciation are fundamental for the understanding of many processes of biomedical interest. For example, embryonic cells are interesting as they have illimitable replicative power and the ability to generate any type of tissue, a property they have in common with stem cells. On the other hand, non-controlled proliferation and differentiation of stem cells often denote presence of cancer. Cell migration can also be involved in such processes, and through our research we expect to find a way to represent both molecular and cellular migration in the context of P systems. In this framework a sensible place to start is by modelling the concept of the biological gradient, which might be achieved by means of nested membrane localization. Finally, cell Darwinian (and other) evolution of synthetic cells could give interesting insights on several controversial issues in population genetics evolution theories (such as the importance of the chance in evolutional transformations, known as genetic drift). 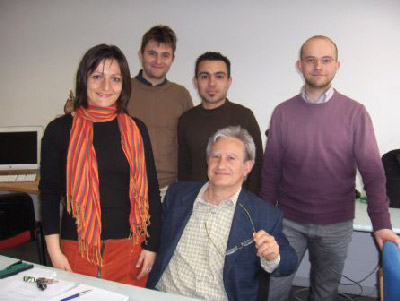 Research group at the University of Verona.