Exploration of chronobiological systems is emerging as a growing research field within bioinformatics, focusing on various applications in medicine and agriculture. From a systems biology perspective, the question arises as to whether biological control systems for regulation of oscillatory signals utilize similar mechanisms to their technical counterparts. If so, modelling approaches adopted from building blocks can help to identify general components for frequency control in circadian clocks and can provide insight into mechanisms of clock synchronization to external stimuli like the daily rhythm of sunlight and darkness. Within the Research Initiative in Systems Biology funded by the German Ministry of Education and Research, we develop new methods to cover temporal aspects of biological information processing employing oscillatory signals.

Oscillatory signals play a major role in triggering time-dependent processes like melatonin and serotonin segregation to initiate tiredness and alertness. Biochemical core oscillators are simple devices that generate continuously running clock signals by periodically alternating substrate concentrations. Therefore, astonishingly small reaction networks comprising at least one feedback loop suffice to keep the system running. It is likely that numerous evolutionary origins led to oscillatory reaction networks in biological systems, while a number of independent attempts led to the technical construction of single clocks or clock generators. The situation becomes more complicated if several core oscillators start to interact in concert with environmental rhythmicities. Resulting biological systems are commonly driven to achieve a synchronous behaviour, resulting in an evolutionary advantage for exploitation of environmental resources. Correspondingly, technical clock synchronization is frequently motivated by the need to follow a global time. 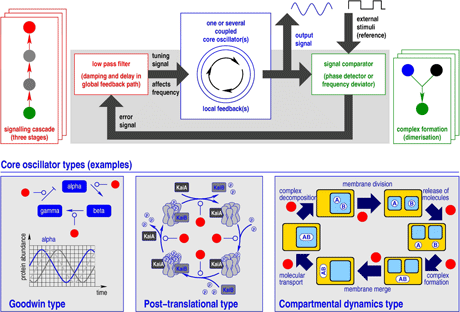 Figure 1: General scheme of a pure chemical frequency control system based on the concept of phase-locked loops (PLL). The upper part shows the coupling structure of the three essential modules: core oscillator, signal comparator, and low pass filter. Each module can be represented by numerous reaction networks. For instance, complex formation suffices for acting as signal comparator while a signalling cascade exemplifies a low pass filter. Different types of core oscillators complete the control circuit.

The way in which clock synchronization occurs differs between computer systems and biological systems. While in distributed computer systems, algorithmic approaches predominate, biological systems adjust their clocks more gradually. This gradual adjustment might include sequences of dedicated modifications in molecular structures or compartmental dynamics. Typically, its description is either based on reaction-diffusion kinetics or employs more abstract analytic techniques adopted from general systems theory. What these state-of-the-art approaches in systems biology have in common is that they both exploit systems of differential equations derived from kinetic laws of the underlying set of reactions and transportation processes. Coping with the complexity of those monolithic models is a challenging and error-prone task. Additionally, the modelling often coincides with some incomplete or imprecise information about the desired network topology and its kinetics. To overcome these insufficiencies, we suggest a specific concept of reaction system modularization inspired by engineering..

Our concept is based on the assumption that 'structure follows function'. Although, there are many strategies to achieve a certain network function, the pool of sufficient network candidates can be divided into compositions of a low number of elementary functional units called modules. This term is not new in systems biology when considering recurrent motifs conserved in metabolic, cell signalling, and gene regulatory networks. We extend its notion in terms of information processing: In this context, a module is able to fulfill an elementary computational task. Here, the spatio-temporal course of substrate concentrations along with molecular and compartmental structures acts as data carrier. Beyond logic and arithmetic functions carried out by the module's steady-state behaviour, simple buffer and delay elements contribute to a collection of biochemical modules, each of which comprises a few molecular species and reactions. When combining modules to form reaction networks capable of a more complex functionality, we permit shared molecular species among distinct modules. This way of coupling enables compact network topologies in accordance with observations from in-vivo studies. Moreover, there is no need for further interface specifications. In most cases, the module behaviour can be captured by chemical counterparts of transfer functions significantly reducing the number of distinct parameters by keeping the relevant characteristics of the entire network.