The aim of this research is to contribute to the 'greening' of city traffic through investigation of heterogeneous traffic dynamics on urban road networks.

This study, which builds on previous work in the area of traffic flow modelling done by our group, is one of several current related projects in the Centre for Scientific Computing & Complex Systems Modelling at Dublin City University. The work is funded by the Irish Research Council for Science, Engineering and Technology (IRCSET), through an 'Embark Initiative' postgraduate scholarship.

The motivation behind the project lies in a desire to contribute to the 'greening' of urban transport. Its focus, in concrete terms, is on dynamics of bicycle traffic as part of the overall urban transport picture in cities like Dublin. The city, with respect to bicycles, is characterised by a lack of dedicated cycle lanes and bicycle-specific control measures, that is, by motorised and non-motorised modal coexistence under conditions suited to exclusively motorised flows. Understanding these dynamics is crucial to providing the best control and management strategies, in terms of successfully promoting 'green' modalities at the lowest possible cost.

Discrete simulation models of traffic based on cellular automata (CA) have existed since the 1980s but have only become a widely researched topic since the availability of computers sufficiently powerful to tackle the complexities of vehicular traffic. These models are microscopic in nature, in that they describe the behaviour of individual particles and their interactions at a local level, but have the purpose of ultimately providing information about throughput and average delays. Complexity is added to the task of modelling traffic flows by the presence of many transport modes, in particular those for which the units differ widely in size, potential for movement and behaviour. Network structure is another fundamentally complex element in a traffic system under simulation.

In the first phase of this project, our aim was to define a simulation model that would answer three questions: 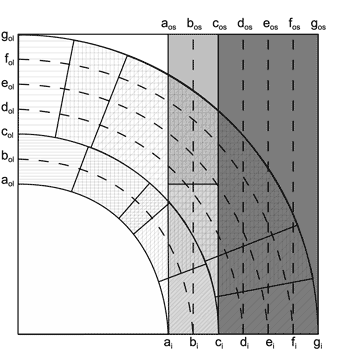 Figure 1: Discretisation of the natural geometry of a left turn (on a left-hand driving road, as in Ireland or the UK): The transversal positions are defined by lines aiaos ... gigos for straight ahead and by lines aiaol ... gigol for turning left. Cells of both the left-most bicycle position and the right-most car position, in the straight ahead direction and the left direction, are shown by shadings and hatchings, respectively. At the entry point, both cars and bicycles are faced with a decision (left or straight ahead?). A conflict exists between bicycles in the left-most position going straight and cars in the right-most position going left.

We have, to date, answered these questions through a simulation model, which provides macroscopic measurements for random network configurations. (1) In addition to the discrete movements in the longitudinal dimension of the road, we have introduced a discrete measurement of the transversal position of vehicles, necessary in the conditions of lane-sharing, since a vehicle's transversal position is not only defined by the lane it occupies but also by its take up of the lane space. This means that allowed positions overlap. Our model is thus strictly not a CA one, although it still retains CA elements, in its basic movement rules. (2) Since the presence of more than one geometrically different model makes the abstraction of intersections and other complex features of the network extremely difficult, the approach has been to draw a geometrically natural representation of an intersection to be modelled, including conflicts and divergence of roads, and to extract a numerical model of the intersection literally "from the picture". In order to make this model fit with the shared road model, transversal positions on routes through an intersection are mappable onto transversal positions of a shared road. (3) From the point of view of vehicle movement, a network can be reduced to a collection of "conflicts" and "decisions". A conflict point is a place where two routes overlap, while a decision point is a point in the network where intelligence needs to be applied for the next movement to be determined.

Further work on this project will initially involve the application of the model to more complex network configurations. As the scale of the simulations is increased, additional processing power will be needed and we aim at devising parallelization strategies for the simulations. Once the robustness of the model is confirmed through simulations of the highly complex network configurations, different management and control strategies will be modelled and compared. Real life measures taken in the direction of bicycle-friendliness will be of particular interest, as simulations of "before and after" scenarios, incorporating available data on the effects of changes, will provide a true test for the model.