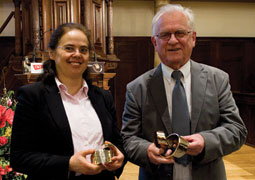 On the occasion of the 65th anniversary of CWI in Amsterdam, the Hungarian computer scientist Éva Tardos and the New Zealand mathematician John Butcher received the Van Wijngaarden Award 2011 on 10 February 2011. The award is intended for scientists who contributed significantly to their fields. Éva Tardos is Schurman Professor of Computer Science at Cornell University in Ithaca, USA. Her research interests comprise algorithms and algorithmic game theory, in which she especially takes selfishness into account. The mathematician John Butcher, Emeritus Professor at the University of Auckland in New Zealand, works on numerical methods for ordinary differential equations. Applications include the simulation of waves. The Van Wijngaarden Award is named after Adriaan van Wijngaarden (1916 – 1987), one of the founders of computer science in the Netherlands.