The World Wide Web Consortium (W3C) has opened its German-Austrian office at a new location: DFKI, the German Research Centre for Artificial Intelligence. This collaboration was celebrated on February 10th with an event in Berlin. Speakers from W3C, industry and DFKI as well as German ministries gave presentations and made the event a highlight for European politics, industry and research.

The internationally renowned DFKI, with facilities in Kaiserslautern, Saarbrücken, Bremen, and a project office in Berlin was founded in 1988 as a non-profit organization by several German IT companies and two research facilities. DFKI has been an active member of W3C for a long time and has contributed to areas like Semantic Web, EMMA, EmotionML, MathML or multimedia semantics. These achievements are one of several reasons to bring the German-Austrian W3C office to DFKI. 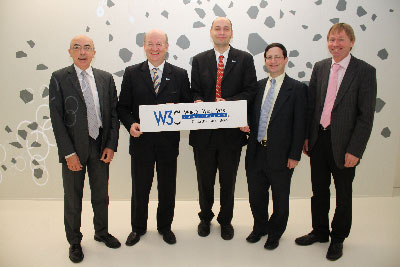 In his opening presentation, Wolfgang Wahlster (CEO of DFKI) emphasized the central role that the Web plays for any kind of IT intensive industry. DFKI owns an ideal position in Germany to integrate W3C with research, politics and industry.

Participation in standardization efforts is a key means for DFKI to connect research with innovation and with the development of applications and products. In their presentations, Wolfgang Wahlster, Philipp Slusallek and Hans Uszkoreit gave an overview of the variety of W3C related topics in which DFKI is engaged: Object Memory Modelling (OMM), the Unified Service Description Language (UDSL), XML3D, and language technologies. Orestiz Terzidis (SAP) expressed his hope that USDL will soon be entering the regular W3C standardization process.

Andreas Goerdeler from the German Federal Ministry of Economics and Technology gave examples of BWMI funded projects that have created input to standardization within W3C. He also emphasized the importance of close cooperation between standardization bodies like W3C or ISO and its national counterparts.

Jeff Jaffe, CEO of W3C, gave a concrete and important example how that cooperation is brought to life. Last November, W3C received the status of an “ISO/IEC JTC 1 PAS Submitter”. This means that W3C Recommendations can easily enter the ISO process and become ISO specifications. Jeff Jaffe and Philipp Hoschka, W3C Ubiquitous Web domain lead, presented a great variety of current topics in Web related standardization. These topics impressively demonstrated the demands from IT intensive industry. The presentation by Stefan Wess, CEO of the German company Attensity, illustrated the role of the Web in social media analysis.

The official part of the event ended with a contribution from Michel Cosnard, President of ERCIM and INRIA. Together with Wolfgang Wahlster, Michel Cosnard emphasized the central role that Web technologies and their standardization plays for European ICT infrastructure. To this end, ICT labs (a “Knowledge and Innovation Community” supported by the European Institute of Innovation & Technology) are an important means to connect IT related education, research and innovation.

The big variety of presentations and participants in the opening event of the German-Austrian W3C office at DFKI demonstrate that the office fulfils its role of bringing heterogeneous communities like politics, research and industry together. The office will help to build steady bridges between these communities and will help to fulfil their common goal, ie to work on the future of the Web.