Computational Grids and Clouds remain highly specialized technologies that are only used by scientists and large commercial organizations. To overcome this gap, University of Innsbruck is conducting basic research that is unusual compared with previous academic research projects in that it addresses a new class of application that appeals to the public for leisure reasons: Massively Multiplayer Online Games. Online games have the potential to raise strong interest, providing societal benefits through increased technological awareness and engagement. By standardizing on a Cloud-based platform and removing the need for large investments in hosting facilities, this research may remove the technical barrier and the costs of hosting MMOGs, and thus significantly increase the number of players while keeping the high quality of responsiveness of action games.

Online entertainment, including gaming, is a strongly growing sector worldwide. Massively Multiplayer Online Games (MMOG) grew from 10,000 subscribers in 1997 to 6.7 million in 2003 and the rate is accelerating, with the number of subscribers estimated to be 60 million by 2011.

Today, MMOGs operate as client-server applications, in which the game servers simulate a persistent world within a game session, receive and process commands from the players distributed in the Internet (shootings, collection of items, chat), and interoperate with a billing and accounting system. Game servers are typically hosted by specialized companies called Hosters that rent to game operators computational and network capabilities for running game servers with guaranteed Quality of Service (QoS).

To support millions of active concurrent players and many other entities simultaneously, Hosters install and operate a large static infrastructure, with hundreds to thousands of computers onto which the load of each game session is distributed. However, the demand of a MMOG is highly dynamic and depends on various factors such as game popularity, content updates, or weekend and public holiday effects. To sustain such highly variable loads, game operators over-provision a large static infrastructure capable of sustaining the game peak load, even though a large portion of the resources is unused most of the time. This inefficient resource utilization has negative economic impacts by preventing any but the largest hosting centres from joining the market, and dramatically increases prices.

Today, acquiring own parallel computers is becoming less and less attractive to application developers or operators, since this is usually constrained by budget limitations, requires high-operational costs, and is ultimately affected by hardware deprecation following the Moore’s law. To address this problem, a new research direction, known as Cloud computing, proposes an alternative by which resources are no longer hosted by the researchers’ computational facilities, but leased from large specialized data centres only when and for how long they are needed. This frees institutions from permanent maintenance costs and eliminates the burden of hardware deprecation. Through a new concept of “scaling-by-credit-card”, Clouds promise to immediately scale up/down an infrastructure according to the temporal needs in a cost-effective fashion. Moreover, the concept of hardware virtualization can represent a significant breakthrough for automating the deployment process of complex software that today remains a tedious and manual process that requires manual intervention of skilful computer scientists. Finally, the provisioning of resources through business relationships constrains specialized data centre companies in offering a certain degree of QoS encapsulated in Service Level Agreements (SLA) that significantly increases the reliability and the fulfilment of user expectations. 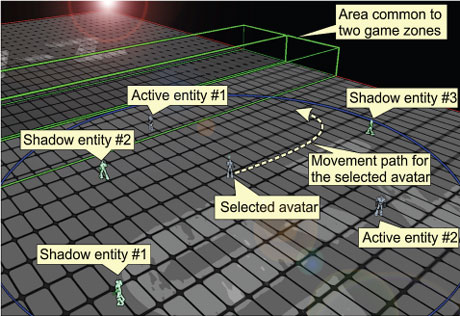 Figure 1: Snapshot from a First Person Shooter action game demonstrator developed at the University of Münster, Germany. The selected avatar represents the player that took the snapshot. The session is parallelized through game world, zoning on a large amount of servers, from which two servers with a common area for hiding avatar migration latencies is displayed for readability reasons. The two zones are further parallelized using entity replication: some of the entities close to the player are managed by the same server (the white active entities), while others are managed by another server (the light-green shadow entities).

At the University of Innsbruck we are conducting basic research that aims to augment existing Cloud technologies with generic methods for QoS provisioning for real-time computationally-intensive applications. The ultimate goal is to apply and validate the generic research methods to MMOGs, as a novel class of socially important applications with severe real-time computational requirements to achieve three innovative technical objectives:

These important goals are being technically achieved by investigating:

This research originally started as part of the IST-034601 edutain@grid project which successfully completed in September 2009, and is currently being continued as part of a national project funded by the Austrian Science Fund (TRP-72-N23).

Please contact:
Radu Prodan
University of Innsbruck, Austria
Tel: +43 512 507 6445
E-mail: This email address is being protected from spambots. You need JavaScript enabled to view it.{jcomments on}