MapReduce is a parallel programming model for large-scale data processing that is widely used in Cloud computing environments. Current MapReduce implementations are based on master-slave architectures that do not cope well with dynamic Cloud infrastructures, in which nodes join and leave the network at high rates. We have designed a MapReduce architecture that uses a peer-to-peer approach to manage node churn and failures in a decentralized way, so as to provide a more reliable MapReduce middleware that can be effectively exploited in dynamic Cloud infrastructures.

Current MapReduce implementations, like Google’s MapReduce, are based on a master-slave architecture. A job is submitted by a user node to a master node that selects idle workers and assigns a map or reduce task to each. When all the tasks have been completed, the master node returns the result to the user node. The failure of one worker is managed by re-executing its task on another worker, while master failures are not explicitly managed as designers consider failures unlikely in reliable computing environments, such as a data centre or a dedicated Cloud.

In contrast, node churn and failures – including master failures – are likely in dynamic Cloud environments, such as a Cloud of clouds, which can be formed by a large number of computing nodes that join and leave the network at very high rates. Therefore, providing effective mechanisms to manage such problems is fundamental to enable reliable MapReduce applications in dynamic Cloud infrastructures, where current MapReduce middleware could be unreliable.

At the University of Calabria and ICAR-CNR we have designed an adaptive MapReduce framework, called P2P-MapReduce, which exploits a peer-to-peer model to manage node churn, master failures, and job recovery in a decentralized but effective way, so as to provide a more reliable MapReduce middleware that can be effectively exploited in dynamic Cloud infrastructures.

P2P-MapReduce exploits the peer-to-peer paradigm by defining an architecture in which each node can act either as a master or a slave. The role assigned to a given node depends on the current characteristics of that node, and can change dynamically over time. Thus, at each time, a limited set of nodes is assigned the master role, while the others are assigned the slave role. Each master node acts as a backup node for the other master nodes. A user node can submit a job to one of the master nodes, which will manage it as usual in MapReduce. That master dynamically replicates the entire job state (ie, the assignments of tasks to nodes, the locations of intermediate results, etc.) on its backup nodes. If those backup nodes detect the failure of the master, they will elect one of them as a new master that will manage the job computation using its local replica of the job state. 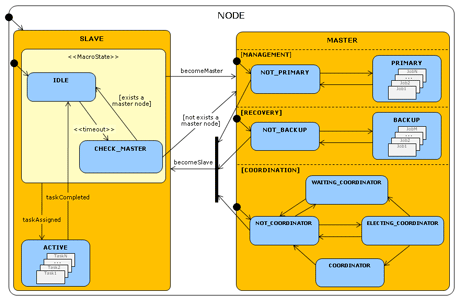 The behaviour of a generic node is modelled as a state diagram which defines the different states that a node can assume, and all the events that determine transitions from one state to another state (see Figure 1). The slave macro-state describes the behaviour of an active or idle worker. The master macro-state is modelled with three parallel states, which represent the different roles a master can perform concurrently: possibly acting as a primary master for one or more jobs (management); possibly acting as a backup master for one or more jobs (recovery); coordinating the network (coordination). The goal of a master acting as the network coordinator is to ensure the presence of a given percentage of masters on the total number of nodes; to this end, it has the power to change slaves into masters, and vice versa.

We implemented a prototype of the P2P-MapReduce framework using the Sun’s JXTA peer-to-peer framework. In our implementation, each node includes three software modules/layers: Network, Node and MapReduce (see Figure 2). The Network module is in charge of the interactions with the other nodes using the pipe communication mechanism provided by the JXTA framework; additionally, it allows the node to interact with the JXTA Discovery Service for publishing its features and for querying the system (eg, when looking for idle slave nodes). The Node module controls the node lifecycle; its core is represented by the FSM component which implements the logic of the finite state machine shown in Figure 1. Finally, the MapReduce module manages the local execution of jobs (when the node is acting as a master) or tasks (when the node is acting as a slave). Currently this module is built upon the local execution engine of Apache Hadoop. 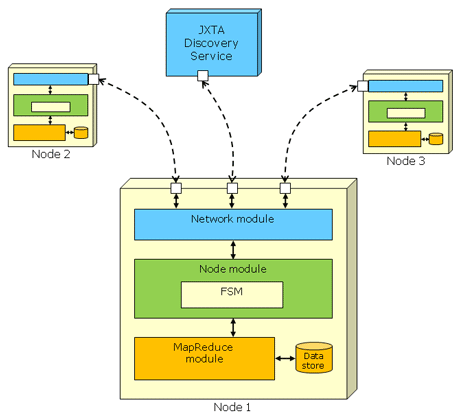 Figure 2: Software architecture of the P2P-MapReduce framework. Each node includes three software modules/layers: Network, Node and MapReduce. The Network module provides communication mechanisms with the other nodes and with the JXTA Discovery Service. The Node module implements the logic of the finite state machine shown in Figure 1. The MapReduce module manages the local execution of jobs and tasks.

We are carrying out a set of experiments to evaluate the behaviour of the P2P-MapReduce framework compared to a standard master-slave implementation of MapReduce, in the presence of different levels of churn. Early experimental results show that, in contrast to standard implementations, the P2P-MapReduce framework does not suffer from job failures even in presence of very high churn rates, thus enabling the execution of reliable MapReduce applications in very dynamic Cloud infrastructures.

Please contact:
Domenico Talia
ICAR-CNR and
DEIS, University of Calabria, Italy
Tel: +39 0984 494726
E-mail: This email address is being protected from spambots. You need JavaScript enabled to view it.