by Malin Forsgren and Martin Aronsson

The new planning process, developed by SICS, is called Successive Allocation, and the general principle governing it is the separation of the train plan into two parts: (i) The service that Trafikverket (the Swedish Transport Administration) commits to deliver to its customers (the operators), and (ii) Production plans containing the details of how Trafikverket will deliver what has been promised. The latter is significantly improved by applying elements of lean production and just-in-time. 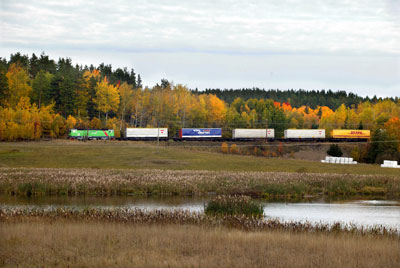 Since 2005 SICS has been conducting timetable related research which has resulted in a prototype tool for efficient timetable generation. Just as important, research has also shown that there is huge potential to revise the entire planning process at Trafikverket (the Swedish Transport Administration), to enable seamless and continuous plan updates and to offer flexibility and better service to their customers.

The current projects are called Train Plan 2015 and Maraca, both stemming from the project The Dynamic Train Plan (2005-2008). While Maraca focuses on developing algorithms for an optimizing tool, Train Plan 2015 has been looking at (among other things) how the process at large needs to evolve in order to get the most benefit out of technological improvements like optimizing tools.

As of this year, the railway market in Sweden is completely deregulated, meaning that many operators now compete for the same capacity. It’s the task of Trafikverket to coordinate the applications for train paths from all operators and create one single train plan for the whole country, for one full year at a time. The 2011 train plan takes shape between April and September 2010, takes effect in mid-December 2010 and is valid until mid-December 2011.

Establishing a very detailed plan as long as 15 months in advance (which is the case for the last trains in the plan) does not seem very efficient, particularly given the complexities involved with making changes to the plan. After examining the process, the researchers at SICS were able to show how applying elements of lean production and just-in-time would improve the planning process significantly.

The key is to minimize waste, and to "pull" rather than "push", throughout the process. Translated to our setting, lean production means that Trafikverket should avoid putting effort into producing anything (eg details in a plan) that is likely to become outdated before it will be used. The pull strategy involves producing only what the next step in the value chain really needs, when it is needed, and to perform only value-adding activities.

The new process is called Successive Allocation, and the general principle governing it is the separation of the train plan into two parts: (i) the service that Trafikverket commits to deliver to its customers (the operators), and (ii) production plans containing the details outlining how Trafikverket will deliver what has been promised. The first part is negotiated and clearly stated in contracts, and should typically include the arrivals and departures that are important to the operators. All other details belong in the production plans, and can change as often as necessary as long as the delivery commitments stay the same.

With the high capacity utilization of the railway network that we see today in Sweden, the change suggested by SICS could potentially result in huge savings for the railway sector, and for society as a whole, since it will make railway traffic more efficient and flexible. Trafikverket has set up a development program to have the Successive Allocation incorporated by the year 2015, and SICS will continue to play an important role while this change is being implemented.

Please contact:
Martin Aronsson
SICS; Sweden
Tel: +46 8 633 15 87
E-mail: This email address is being protected from spambots. You need JavaScript enabled to view it.