Andrea Esuli from ISTI-CNR has been chosen by ERCIM as the winner of the 2010 Cor Baayen Award for a promising young researcher in computer scienceand applied mathematics. 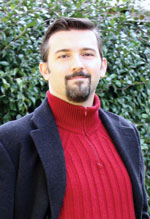 During the course of his PhD work and his postdoctoral research, Andrea Esuli has obtained outstanding results by combining cutting-edge speculative reasoning with top-quality technical solutions, and has produced results of unquestionable societal and commercial value.

One of Esuli’s distinctive characteristics as a researcher is his broad range of capabilities. He is neither a purely theoretical thinker, nor a mere experimenter, but a mature researcher with the ability to conceive innovative solutions and immediately test them. This is so thanks to a strong theoretical background and to excellent technological abilities. Esuli's activities and results range from academic research to the development of industrial-strength innovative applications. Concerning the former aspect, he must be credited (among others) with being one of the early researchers in the field of sentiment analysis and opinion mining. This field, that is so popular nowadays, was still a tiny niche in 2005 when Andrea published his first paper on the subject, at a highly selective ACM conference. Nowadays, Andrea is recognized as a top player in the field; he was invited to speak on this topic as a panelist at the GWC 2008 confe rence, even before getting his PhD, which is a rare feat.

One of the results of his PhD research on lexical resources for opinion mining is SentiWordNet, a lexical resource licensed to more than 400 research labs / companies worldwide, and widely considered the reference lexical resource for opinion mining applications. The systems developed in the course of his research on supervised machine learning algorithms, training data cleaning, and active learning for automatic text classification, are now part of the Verbatim Coding System (VCS), a highly successful software system for the analysis of textual answers returned by respondents to questions issued in the context of opinion surveys. VCS, the recipient of one international and one national award, has been licensed to corporate end users whose Customer Relationship Management departments use it in their daily operations, and is now an integral part of the Ascribe(TM) platform marketed by Language Logic (http://www.languagelogic. info/), the world leader in the provision of survey management software services. A more recent thread of Esuli’s research is on highly efficient similarity search, for which he has developed a novel algorithm based on prefix-permutation indexing. In addition to generating scientific publications, Andrea has turned this algorithm into a working search engine for images (http://mipai.esuli.it/) that currently allows image similarity search on CoPhIR, the largest image dataset available for research purposes. Esuli’s algorithm allows similarity searches to be conducted on CoPhIR in sub-second response times, a feat currently neither attained nor approached by competing systems. This algorithm has resulted in a patent submission currently under review by the US Patent and Trademark Office.

Andrea Esuli holds an MSc in Computer Science (2001), an MSc in Computer Science Technologies (2003), and a PhD in Information Engineering (2008), all from the University of Pisa, and all with full marks and “cum laude”. From 2002 to 2004 he was a research associate at the Department of Computer Science of the University of Pisa, where he worked in the area of high-performance information retrieval, with particular emphasis on algorithms and data structures for large-scale collaborative text indexing and “query search” processes. Since 2005, he is with the Istituto di Scienza e Tecnologie dell’Informazione, Consiglio Nazionale delle Ricerche, Pisa, where he has carried out research in the areas of text classification, information extraction, and opinion mining. He has a great research record for this stage of his career and has authored some truly influential papers.