In the 2010, the 35th International Symposium on Mathematical Foundations of Computer Science (MFCS 2010), sponsored by ERCIM and 19th EACSL Annual Conferences on Computer Science Logic (CSL 2010) were federated and organized in parallel. The scientific program of MFCS & CSL 2010 was further enriched by twelve satellite workshops on more specialized topics. The symposium was attended by more than 350 participants from 38 countries and five continents.

The main conferences and their satellite events were hosted by the Faculty of Informatics, Masaryk University, Brno, Czech Republic, on 21-29 August 2010. Masaryk University if a founding member of CRCIM, the Czech member institution of ERCIM. 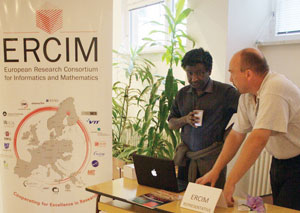 The series of MFCS symposia, organized in rotation by Poland, Slovakia, and the Czech Republic since 1972, encourage high-quality research in all branches of theoretical computer science. Their broad scope provides an opportunity to bring together researchers who do not usually meet at specialized conferences.