Within the scope of the EU project CASPAR (Cultural, Artistic and Scientific knowledge for Preservation, Access and Retrieval, started in 2006) and the OAIS standard (Open Archival Information System), our team (CNRS/Université de Technologie de Compiègne) is focusing on the long-term preservation of artistic resources. The aim was to propose a framework which preserves access to these resources and maintains their intelligibility over the long term. The more precise objectives were to aid both the study of artistic productions and new performances of these works. Our contributions led us to design a tool for producing and accessing archives: Cyclops.

During the project, our team worked with a number of institutions involved in artistic productions: INA (Institut National de l’Audiovisuel), IRCAM (Institut de Recherche et Coordination Acoustique/Musique), University of Leeds, and CIANT (International Centre for Art and New Technologies). From the point of view of preservation, their archives are complex objects. Indeed, works such as electroacoustic music or multimedia installations are based on hardware and software that can quickly become obsolete, and they involve non-digital components which need to be described/digitized in order to preserve the intelligibility of the whole. So, the question is: how to achieve long-term preservation with the relevant designated community (ie the users of these archives, including composers, musical assistants, archivists and musicologists)?

Since the specialty of our team is knowledge engineering, we started by modelling activities. We proposed a way to structure the archives using the CIDOC CRM ontology (International Committee for Documentation – Conceptual Reference Model, ISO 21127) in order to describe the life cycle of the works. It allows users to account for each resource according to its relationship with all the others. It makes the history of the works explicit by answering this question at each step of the production flow: who did what?

We also provided a model for the acousmatic works from INA (electroacoustic music) and a methodology with which to archive artistic productions. We validated the model and the methodology for several acousmatic works, with other partners using a similar approach: eg the University of Leeds with interactive multimedia performances. However, since the members of the designated communities are not knowledge engineers, we proposed an interface for the CASPAR system that meant they need not handle the CIDOC CRM ontology. We named this interface Cyclops.

The Cyclops tool allows archive producers to describe the life cycle of an artistic work. When Cyclops is installed in an institution, it is associated with a set of concepts, relations and types that come from its domain. Users manipulate these terms (which are common for them) within a graphical representation of the life cycle (see Figure 1). 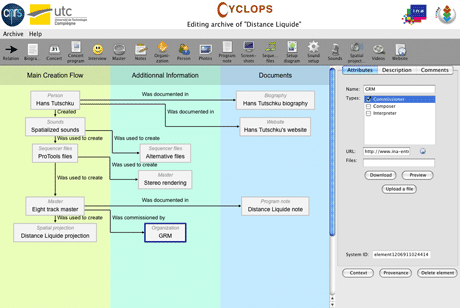 Some members of these designated communities have successfully produced archives using Cyclops. It was also used for the scenarios of the artistic testbed, for instance when the implicit knowledge of the production team is changing. The tool provided concrete elements related to some of the key concepts of the OAIS standard, especially concerning representation information, context and provenance. Moreover, demonstrations of interaction with other CASPAR components were made, especially with the DRM component (Digital Rights Management) and for the IRCAM scenarios (electroacoustic music).

Cyclops is also a tool for accessing the archives. A dedicated browsing mode allows users to search and access the archives. Reading the life cycle of an artistic work and referring to attached documents is helpful in understanding it, but is not sufficient for the long term. This is why we implemented features related to preservation through access. Each element of a life cycle can be commented on and thus documented, thanks to the contributions of the users. If the designated community accesses an archive actively, this archive is still alive.

Cyclops is a Web application and is open source. It uses the following technologies: XUL, JavaScript, SVG, HTML, CSS, XML, PHP, MySQL. While it is planned that Cyclops will be used on top of a CASPAR system, it additionally provides a stand-alone mode using its own Web server to store the files.

Now that the CASPAR project is completed, further uses will be found for Cyclops. The tool will continue to be used by some partners on top of the CASPAR system. Some artists who are interested in the approach will also use it through its standalone mode. Furthermore, we can establish new collaborations to adapt Cyclops to other institutions.