It is estimated that in the UK, about half of the 1.47 million desktop computers owned by further and higher education institutions are left on all the time. If power management practices are improved annual savings would be in the order of £64 million and 285 million kg of CO2 equivalents. Tools and techniques are readily available to achieve these reductions. This paper outlines the approach taken by staff at the University of Oxford who have developed a five step approach to 'green' desktop computing.

There are good reasons why computer power saving is often disabled, as it potentially:

A full discussion of these issues is given by Lisa Hopkins et al on the ‘PowerDown’ Web site (see Links) and also the British Computer Society (http://www.bcs.org/server.php?show=conWebDoc.28412)..

The easiest, safest and most reliable way to reduce energy consumption, across all types of operating systems and hardware, is to switch off idle computers, but the issues listed above need to be addressed in order for this to be effective. Furthermore, organizing the switching off of computers can be a challenge in itself. Sometimes it is difficult for an automatic process to know when a computer is truly idle, eg it may be running a background service for a researcher overnight; at other times, users may forget to close down applications and switch computers off manually. 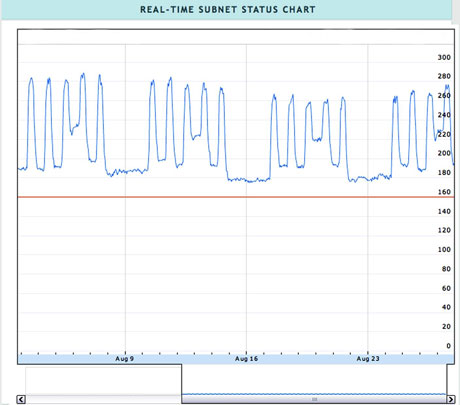 Figure 1: Number of computers powered in a typical unit in the university in August 2009. The x-axis measures weeks and the y-axis the number of desktop machines visible on the network. The five-day working week is apparent, as is some regular activity which occurs overnight between Wednesday and Thursday.

Figure 1 shows the number of computers powered in a typical unit at the University of Oxford over several weeks in August 2009. Office computers that are switched on have an IP address which is visible on the network. Address Request Protocol (ARP) queries can be used to gather and plot the number of devices with IP addresses; this list can be filtered to separate desktop computers from virtual machines, printers, switches and other network devices (ARP provides higher accuracy in identifying devices than normal scanning protocols such as Ping). It is apparent from the graph that while some users switch off their computers outside the working day, there are a substantial number of idle computers left powered.

The University of Oxford has developed two enterprise services to encourage and facilitate power management of desktop computers. The first provides monitoring statistics as shown in Figure 1, and makes the information accessible to users. This is an instance of an important class of tool that provides environmental data in a form that encourages behavioural change; users will be able to track the direct benefits from improved power management.

The second University enterprise service, Wake on LAN (WOL), enables a computer to be switched on remotely. Assuming the BIOS and network card settings support ‘wake on LAN’ and the feature is enabled, a computer can be switched on from the S3, S4 and also S5 (off) states just before third-party services require access, eg for a scheduled back-up, for a remote user, or automatically before a user returns to the office, in order to reduce the time for start-up.

Figure 2 is a schematic representation of the WOL infrastructure. Units across the university can 'plug' into both enterprise services by installing a local gateway server. Full instructions are provided at http://www.oucs.ox.ac.uk/ greenit/wol.xml. Software is freely available under an open-source licence and further information can be requested from This email address is being protected from spambots. You need JavaScript enabled to view it.. 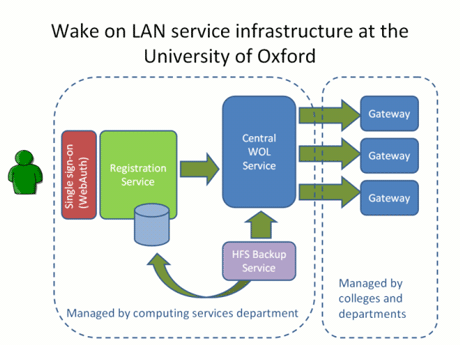 A service to automatically switch off computers matched with WOL would offer the essential tools required for power management.

With the enterprise monitoring and WOL tools in place, the goal is to encourage units across the University to engage with green desktop computing practices. To this end, a five-step process is being promoted:

The practical steps to be taken by an individual unit are straightforward. First, the unit invests around twenty minutes estimating costs and CO2 emissions for desktop computers and consequent potential savings. Second, it invests 1-4 hours installing a gateway server on a spare computer, VM, a mini-ITX, or a small and very cheap device such as a Sheeva plug (a Sheeva plug is a very low-cost plug computer that can be used as the server).

The unit then waits a few days for monitoring data to become available, and decides on a course of action. If all computers are consistently switched off overnight, there is little to be gained in a power management sense, but monitoring should continue. (Note that WOL could still offer benefits to users in terms of ensuring computers are switched on before the start of work.) If it is found that a significant number of computers are left switched on when idle, the unit should promulgate the monitoring statistics and request that users switch off their desktop computers when not in use.

If after this step a significant number of computers are still left switched on, and for those users who are unable to switch off their computers for the reasons discussed above, then there are two things the unit can do. The first is to offer to provide the WOL service in order that desktop computers can be switched on when required; the second is to offer to install tools such as PowerDown that can automatically turn computers off. Some units are considering investing in a commercial solution that makes automatic power-saving modes (S3: sleep/standby) easier to implement. Such services will be used in conjunction with WOL, but there are licence costs and some effort is required to set up and maintain services.

Following these actions, the unit provides a clear definition of its power management policy, eg switch office computers off when idle, log out from shared computers, disable screen savers and enable ‘sleep’ on monitors. The final step is to write up and publish the unit’s approach in the form of a case study.

More information about the Five Steps to Green Office Computing at the University of Oxford is available from the links below.

Please contact:
Howard Noble
University of Oxford, UK
Tel: +44 1865 273211
E-mail: This email address is being protected from spambots. You need JavaScript enabled to view it.