Alternative local energy sources are becoming increasingly popular, creating a new network of small suppliers. Fluctuations in the supply from such sources may cause instability and inefficiency in electricity distribution networks. The IdeaNeD consortium in the Netherlands aims to solve these problems.

Wind turbines, biomass, solar energy and storage facilities are some of the new green developments in energy supplies. In addition, ìCHPs (Combined Heat and Power generators) are being introduced into homes, with conventional heating systems replaced by systems that can produce both heat and electricity. One can thus speak of decentralized power generation in an electricity distribution network (also called active power grids) with many actors. 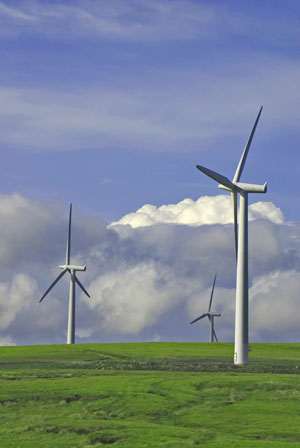 Power production can fluctuate due, for instance, to variations in wind velocity or in the power supply from ìCHPs. The demand for energy also varies. This makes balancing generation and load problematic and has large consequences for power flows. Large-scale use of electric cars increases these problems, with everybody recharging their car after rush hour. It is therefore necessary to improve the management of medium voltage (MV) and low voltage (LV) distribution networks, as most important developments are taking place in these networks.

At the same time, with smart metering and sensor systems appearing all over the network, the amount of available data has substantially increased, and this can be used for management and control purposes in future networks. Due to the very large amounts of data, it is important that it be analysed and compressed, in order to be usable for network and system management.

The SenterNovem project ‘Intelligent and Decentralized Management of Networks and Data’ (IdeaNeD), which started in mid-2009, is investigating the optimal management of such future networks. Researchers in IDeaNeD will design computational methods and instruments that can deal with the large amounts of data and actors involved. The project is developing intelligent decentralized systems for management and data analysis via two main objectives. The first is decentralized management systems for distribution networks, in the form of prototype and proof-of-concept systems for testing, evaluation and development. Such systems will be used and developed in computer simulations with realistic data as well as (later on) with experimental electrical hardware systems in laboratories. They allow for ‘what if’ scenarios for different types of management and deployment of distribution networks. They will also form a base for future operational systems. These take the form of adaptive multi-agent systems, where a software agent is an intelligent software module designed for some area, actor or asset. Such software agents can be located at, for example, control or distribution centres, at intelligent ring main units, or with the users, for managing power cells and consumption. Pricing is one of the mechanisms that could be used to accomplish efficient network management. Electricity costs and benefits for an actor can thus depend on the moment of use and supply, as in day and night rates. For any user or distributor, intelligent software can then determine at what times power is used or produced. An alternative control mechanism to be investigated is 'remote control', enabling electricity companies to have a certain degree of control over usage and supply from a distance.

The second objective is the development of tools that indicate the (future) state of the network. This will require data banks for intelligent network management, as well as conversion, analysis and compression tools for using real sensor data. The objective here is to transform sensor data into control data (performance indicators), which can be used to manage the network and for visualization purposes. Supporting infrastructure for data and communication will also be developed. Important aspects to be controlled and analysed in networks include network loadings, origins of power flows, switching possibilities, dynamic stability and power quality.

Research into the control of distribution networks is now receiving international attention. The IdeaNeD project will lead to both new insights and practical products to be used by energy companies, network operators and industry. This makes the distribution network suitable for new developments; achieving decentralized management and control is the key to decentralized supply and storage of electricity.

CWI is leading the IdeaNeD project, with the other partners being Eindhoven University of Technology, Alliander, KEMA, Stedin, Joulz, Phase to Phase, Early Minute and Alfen. The project is a close collaboration between experts from computer science and the electricity domain as well as between academic institutions and companies.

Please contact:
Han La Poutré
CWI, The Netherlands
Tel: +31 20 592 4082
E-mail: This email address is being protected from spambots. You need JavaScript enabled to view it.