Bonaparte is a software application developed by Smart Research, a subsidiary of SNN at Radboud University Nijmegen, which uses Bayesian Networks to quickly identify a large number of disaster victims. 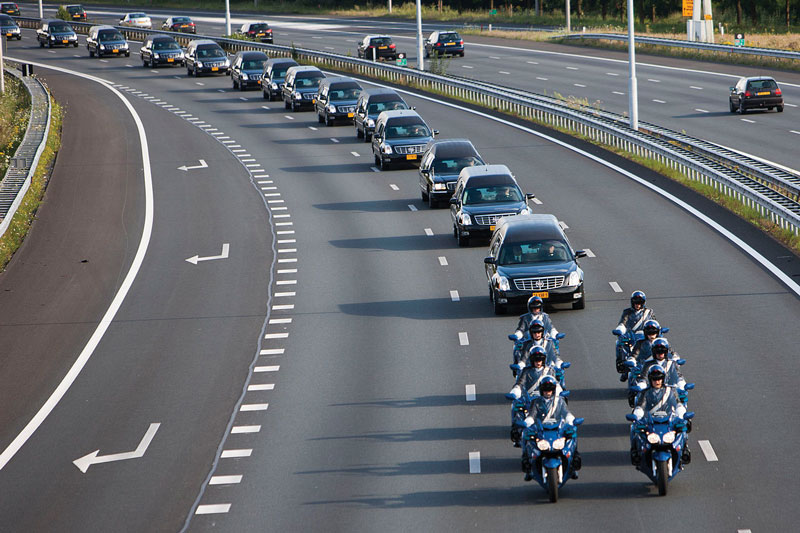 Convoy of hearses with MH-17 victims on the Dutch highway. Source: Ministry of Defence, The Netherlands.

When a mass disaster occurs – for example, an airplane crash or a terrorist attack – there are many important issues to be addressed, including the quick recovery and identification of the remains of the victims. This is of great importance for the families of the victims, so that they can start the grieving process. Bayesian networks can help forensic scientists perform this complex task promptly and reliably.

Matching the remains of the victims with reported missing persons, however, is complicated by the absence of comparative direct DNA samples from the missing person. In this situation, DNA samples are usually obtained from indirect sources (family members). Linking victims with their closest relatives instead of their own DNA is far more difficult since they share some, but not all, of their DNA. In a mass disaster this is further complicated by the scale of the problem.

In order to be well prepared for a mass disaster incident, The Netherlands Forensic Institute (NFI) needed a computer assisted disaster victim identification system. The demands were high from the start: it had to be designed for large scale incidents where large numbers of samples would have to be matched as promptly and reliably as possible.

This has resulted in the development of Bonaparte, a software application that does the matchmaking in minutes instead of months. The software was developed by Smart Research, a subsidiary of SNN at Radboud University Nijmegen by order of and in close collaboration with the NFI.

Bonaparte is named after emperor Napoleon Bonaparte, who introduced the register office in the Netherlands and thus gave every Dutch person a name. The aim of the Bonaparte software is to give the unknown victims back their names.

Bonaparte’s core computation task is the following. Given a family with a missing person (MP), for whom there is no DNA sample, and given the availability of DNA profiles both of other family members and an unknown individual (UI), is UI equal to MP? Bonaparte computes the likelihood ratio LR of the two hypotheses. The first hypothesis is that UI=MP. The second hypothesis is that UI is a random person from the population, unrelated to the family. The LR is defined as the ratio of probabilities of finding UI’s actual DNA profile under these two hypotheses. If LR is sufficiently high, the forensic expert will decide that there is a match.

Bonaparte has been in use by NFI since 2010. The software played an important role in the identification of the victims of the 2010 air disaster in Tripoli, and more recently, in the identification of the victims of Malaysia Airlines flight MH17 in the Ukraine in 2014. Bonaparte is also used for familial searching: in the case of a serious crime, NFI is permitted to search in the national criminal DNA database for relatives of the (unknown) donor of a DNA trace at the crime scene. In 2014 this led to the conviction of a serial rapist who was found via his brother.

Bonaparte has received international interest. Interpol will use Bonaparte for their international missing persons’ program. The Australian government bought the software to improve their DNA case work. Finally, the Vietnam government will use Bonaparte for the identification of victims of the Vietnam War, which is expected to be the largest DNA identification project ever conducted.

Bonaparte is being continually refined, for example, by extending the types of DNA profiles that can be entered into the system according to the latest forensic developments.

Please contact:
Bert Kappen
Radboud University Nijmegen,
The Netherlands
+31 243614241
This email address is being protected from spambots. You need JavaScript enabled to view it.