Cryptographer Léo Ducas from CWI has won the 2016 Internet Defense Prize. He was awarded the prize with his co-authors Erdem Alkim (Ege University, Turkey), Thomas Pöppelmann (Infineon Technologies AG, Germany) and Peter Schwabe (Radboud University, the Netherlands) for their paper 'Post-Quantum Key Exchange – A New Hope'. The prize was awarded on 10 August 2016 at the 25th USENIX Security Symposium in Austin, Texas. Facebook created the Internet Defense Prize in 2014 through a partnership with USENIX. It consists of 100,000 dollars.

The winning team proposed an improved cryptosystem, called 'NewHope', that is designed to resist attacks by future quantum computers. Such quantum computers would have a devastating impact on the security of our current protocols. NewHope can, for example, be integrated into TLS and HTTPS, security protocols used by web-browsers. This was recently done by Google as an experiment toward post-quantum security. The research has been partly funded by an NWO Free Competition Grant and by a Public-Private Partnership between CWI and NXP Semiconductors. 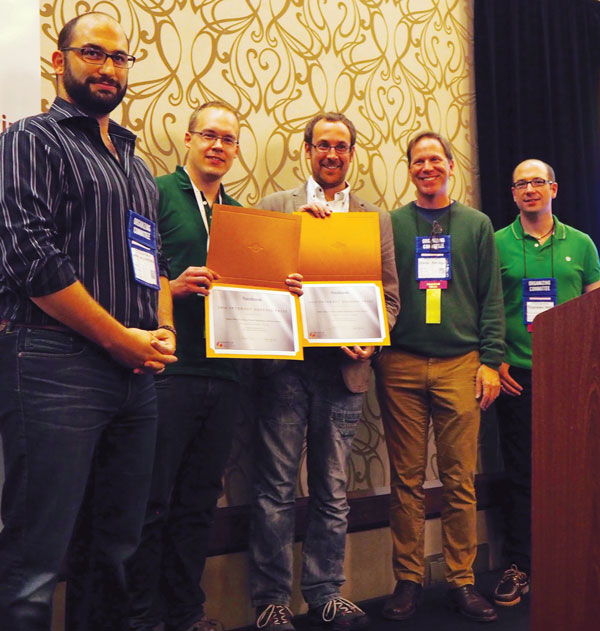 Some of the 2016 Internet Defense Prize winners: second from the left is Thomas Pöppelmann; Peter Schwabe is standing next to him (Alkim and Ducas not pictured). Source: USENIX.