Building up informatica, as computer science came to be called in The Netherlands, has been an international affair. Aad van Wijngaarden, 1916 - 1987, founding father of Dutch computer science was responsible for forging international collaboration and helping to make informatics an international endeavour. His influence reached from cooperative efforts in building computers in the 1940s to Algol68, the epitome of his style of computing. CWI commemorates his 100th birthday this year. 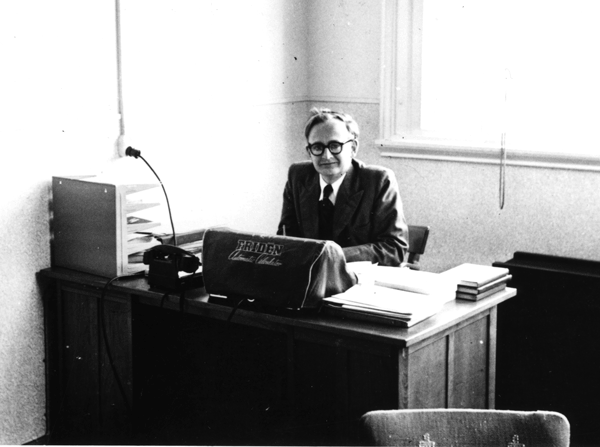 Aad van Wijngaarden at the Mathematisch Centrum in Amsterdam in 1951.
Picture: CWI

London
It was in London, February 1946, that Aad van Wijngaarden’s decision marked the beginning of computer science for The Netherlands. Sent out by Delft University of Technology on assignment to collect all available literature and reprints on the latest developments in mechanical and naval engineering that Dutch research might have missed during the war years, Van Wijngaarden wrote to his supervisor, C.B. Biezeno, that the latest developments in mathematical machines were worthy of a separate report. Up to this point computing had been an auxiliary activity for fields such as engineering, astronomy and physics, but here was a young academic in engineering with his finger on the pulse of international developments and bringing computing into the limelight.

His two Delft mentors facilitated Van Wijngaarden’s trip to London: Jan Burgers, and Cornelis Biezeno. The first, professor of fluid dynamics known for the “Burgers equation”, the latter, professor of Applied Mechanics and known for the big book with Richard Grammel, Technische Dynamik. Burgers created the scheme that sent out out a dozen young Delft scholars  on a post-war reconnaissance tour to the United Kingdom. Biezeno chose Van Wijngaarden to be a member of that team and assigned him two study topics.

During the war years Van Wijngaarden had been calculating tedious computations in turbulence supervised by Burgers. When in early 1945 Burgers asked him to summarise the work in a dissertation, Aad rejected and threw away the results because ‘it simply lacked beauty’. At this point, Biezeno, for whom he had solved several major problems raised in Technische Dynamik  stepped in and saved the day by guiding him to a cum laude doctorate on those results, which he completed by December 1945. These two teachers not only taught him to do sophisticated computations, but perhaps just as importantly raised him in an atmosphere of internationally oriented scholarship. Biezeno and Burgers had earlier created the tradition of quadrennial congresses in Theoretical and Applied Mechanics starting in Delft in 1924. Now, in 1948, Burgers oversaw the formation of a committee on computing technology chaired by the Parisian professor Auger, with Van Wijngaarden as its secretary. They sent letters to academics throughout northern Europe with the hope of engaging other institutions and although the responses were sparse, the spark of international cooperation was lit.

Amsterdam
It was in Amsterdam, February 11th 1946, that mathematicians turned their ambition to put mathematics at the service of society into the founding of a research institute, the Mathematical Centre, now CWI.  Van Wijngaarden was appointed head of the centre’s computing department by January 1947. Most of his first year was spent in the UK and the US. It is likely that anyone in that position would have been destined to be considered as the founding father of informatica in The Netherlands, but Van Wijngaarden went well beyond the call of duty. He was capable of making the leaps of intellect, the reflections that lifted the emerging discipline to new levels of abstraction. In those early years, Van Wijngaarden contributed to the field – then known as numerical analysis - with subtle reflections on rounding off errors when using the new machine power.

Machines, however, were not readily available. Means and components were scarce in a small country like The Netherlands, and once again international cooperation was sought with both Belgium and France – to no avail. In 1949 and 1951 two very promising bids were made for a Unesco-sponsored International Computing Centre (ICC) to be established in Amsterdam with the Mathematical Centre. ,The dynamics of the Cold War placed the ICC in Rome. Although Amsterdam was on its own now to construct machines, Van Wijngaarden followed the English and American examples. The 1952 ARRA was largely an emulation of Booth’s ARC in London.

At this time, building computers was one thing, but getting them properly programmed, quite another. Van Wijngaarden had the vision to appoint Edsger W. Dijkstra as an assistant ‘for the programming of the ARRA’, well before that machine was dedicated, midsummer 1952. Many Europeans learnt programming with Maurice Wilkes at Cambridge Summer School. Further reflections on programming were absorbed at international conferences, - for example, Rutishauser’s concern about readable formulation and unified notation of computer programs, in Darmstadt 1955.

IFIP
International exchange intensified and, quite naturally through his international presence, Aad van Wijngaarden was closely involved in preparing under the aegis of Unesco, the International Conference on Information Processing, to be held in Paris in the summer of 1959. Cold War circumstances dictated that the envisaged international union could only materialise as a federation of national societies – one per country. Hence, in the spring of 1958 on a terrace in Paris, it was decided to create a Dutch society for computing machinery, NRMG.

That summer, August 1958, Van Wijngaarden’s work came to a cruel standstill. Being invited to give a talk on the International Congress of Mathematicians in Edinburgh was a highlight of his career. Leaving the conference with his wife for a holiday in Scotland, his car crashed. His wife died and he spent time recovering in hospital until November. Rather than pick up the pieces after this disaster, he decided to start a new life and embark on a new career: he became a specialist in programming language.

What for him was a new career, was in fact the next step of abstraction in the emerging discipline of computer science. Stepping up from the Darmstadt concern of program notation, a committee of European and American computing specialists joined efforts towards a system of unified notation. The committee was initiated by the German founding father of computer science, Friedrich Bauer. Their next step was to call such a system a language, at first in 1958 International Algebraic Language (IAL), and later Algorithmic Language (ALGOL). The language metaphor had been suggested a few year before in debates on programming in the US, and was now adopted to become the cornerstone of computer science worldwide. It was this wagon that Van Wijngaarden, together with his Amsterdam team, joined in 1959. Computer science was now starting to look like a discipline - an international discipline. And at the Mathematical Centre, the computing department had set its internationally flavoured research agenda.

Copenhagen
From 1959 Aad van Wijngaarden joined the ALGOL committee, taking Dijkstra and others to the preparatory meetings, himself voting at the final meeting in Paris, January 1960, and performing as one of the authors of the ALGOL report. Dijkstra and Zonneveld joined him on a subsequent trip to Copenhagen to meet Peter Naur, acting editor of the ALGOL report, and left with the invitation to come see a working ALGOL compiler in half a year in Amsterdam, August 16th 1960. Van Wijngaarden, prompted by Dijkstra on his side, changed the ALGOL agenda by calling Peter Naur on the telephone and convincing him of phrasing the “call for procedures” in the defining report in such a way that it would allow recursive procedures, a sharply controversial issue for Friedrich Bauer’s German team. Writing the ALGOL compiler in time and in a novel style, Dijkstra convincingly fulfilled the promises of the amended ALGOL agenda.
IFIP, prepared at the 1959 Paris conference, and founded in 1960 created the water to swim in for the internationally oriented scholar Van Wijngaarden. IFIP adopted the ALGOL agenda by creating a working group, WG 2.1, for the development of a successor language. Here Aad van Wijngaarden effectively took the lead with abstract notions of design of language. He astonished the 1965 meeting of WG 2.1 at St. Pierre de Chartreuse with orthogonality and two level grammars –later known as Van Wijngaarden grammars. Standing in awe, the meeting decided that whatever the details of the definition of the new language, it should be formulated along these lines. The successor language came to be ALGOL 68, presented at the IFIP congress in Edinburgh and finalized in December 1968, in a report dense with motto’s, intellectual puns, and literary references. As if the personal mark needed further emphasis, Aad van Wijngaarden garned the back cover of the report with a small hidden @, his personal bookmark symbol.

As a piece of art, ALGOL 68 had, and still has, a small community of admirers. As a programming language, as a tool, it was a failure. It realised the ALGOL agenda set in 1958, in the most beautiful and least practical way. Ten years on, however, the agenda had shifted to software engineering with new pressing questions and a new generation of bright spirits.

The true influence of Van Wijngaarden internationally, apart from his avid cooperation and cooperative spirit, was that he fuelled the intellectual fire in WG 2.1 to such an extent that it spun off in all directions, one deriving from it new principles of language design – yet a level of abstraction higher, another turning orthogonality into SIMULA and object thinking, a third bringing the inspiration down to earth resulting in the development of the language Pascal that educated generations of computer scientists. To The Netherlands Van Wijngaarden left a discipline following research agendas, with a bias for theoretical directions and daring abstractions. In his footsteps, informatica was naturally an international endeavour.

Please contact:
Gerard Alberts, University of Amsterdam, The Netherlands
This email address is being protected from spambots. You need JavaScript enabled to view it.