Many parameters and variants have to be taken into account when planning new production buildings. How do you find the optimal positioning for the production equipment and the most efficient transport paths? Is there a way to find bottlenecks before they hinder your production? The new GrAPPA software makes planning the production a lot easier.

Planning a new production facility or reorganizing an existing production is a difficult task with many factors that must be considered: the positioning of the different production stages, for example, or the size of temporary storages. To run the production at optimal capacity, the workload needs to be equally distributed across all transport paths. While the actual planning is usually done using a two-dimensional floor plan, a three dimensional model offers considerable advantages in presentations, when making estimates involving height or vertical distance, or in granting an intuitive overview of the factory building and the planning scenario. A three dimensional model usually has to be done in a separate step in a different software.

Half the work with a new approach
The software GrAPPA [L1] has been developed by the computer scientists of the Fraunhofer Austria visual computing group together with engineers from the logistics and production planning group. This package makes the planning process easier and more efficient. While drawing, placing and moving workstations on the floor plan, the engineer is also creating a simple 3D model of the factory. This can later be refined by adding detailed and polished models, but even in the early stages it be used to gain quite intuitive insights into the layout of the factory.

The embedded material graph editor allows the user to define relationships and dependencies between the materials being processed, combined or created in the factory. It defines which materials come into the factory and which go out. Numerous properties need to be taken into account. Not only does the size and weight of the materials matter, but it may also be useful to know, for example, how many items of a given material can fit into one transport container to be transported within the factory.

Despite the complexity of such a graph, the embedded editor is quite easy and intuitive to work with. In many cases, this data can also be imported from pre-existing SAP databases, if an existing production is to be analysed. Once the transport paths have been placed in the floor plan, the possible efficiency of the scenario can be analysed. Since it may be more costly to transport large or heavy items, transport paths from one workstation to another should be as short as possible for these materials. Additionally, some paths may be used more frequently than others. If two heavily used paths cross, it might slow production and hinder efficiency. All the information gathered from analysis is displayed clearly in different diagrams, also serving numbers and tables for thorough reliable evaluation. The amount of data displayed to the user is reduced by compressing the data into its most important subsets (as also shown in [1, 2]). Additionally, coloured highlights in the three-dimensional view point out where the planning engineers should focus. 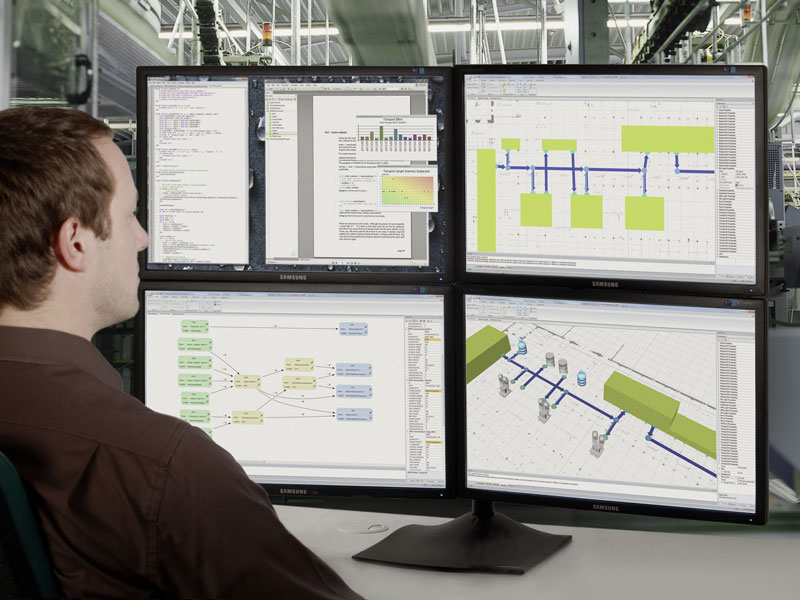 Easily adaptable and extendable
Most of the algorithms, diagrams and analysis tools in GrAPPA are programmed in a specially tailored script language. Whenever part of the factory layout or the data changes, the scripts get notified of the change and may recalculate results, modify information or rebuild diagrams. This has the advantage that all the diagrams, computations and the data layout can be easily adapted to fit the needs of a given factory. In the simplest case, this may be just a colouring issue, to get the diagrams to fit into the corporate identity of the business. Modifying the algorithms is more complex, for example adding a new transportation system would change the outcome of the whole analysis. One key advantage is that it also means that the data layout, by which data is imported into the program, is not fixed but can be adapted to the layout that is already in place in the business’s databases. Also implementing new algorithms or integrating different data combinations is an easy task, thereby making this a perfect test platform for new developments in the area.

References:
[1] A. Halm et al.: “Energy Balance: A web-based Visualization of Energy for Automotive Engineering using X3DOM”, in “Proceeding of the International Conference CONTENT”, 2013, pp. 1 - 10
[2] A. Halm et al.: “Time-based Visualization of Large Data-Sets - An Example in the Context of Automotive Engineering”, in “International journal on advances in software”, 2014, pp. 139 - 149