Drugs are great! We all need and use drugs every now and then. But they can have unwanted side-effects, referred to as “adverse drug reactions” (ADRs). Although drug manufacturers run extensive clinical trials to identify these ADRs, there are still over two million serious ADRs in the U.S. every year – and more than 100,000 patients in the U.S. die due to drug reactions, according to the U.S. Food and Drug Administration (FDA) [1]. For this reason, we are searching for innovative and effective ways to find ADRs.

Identifying ADRs is an important task for drug manufacturers, government agencies, and public health. One way to identify them before a drug goes to market is through clinical trials. Governments worldwide also have diverse surveillance programs in order to identify ADRs once the drugs are in use by consumers. For example, official websites such as MedWatch allow both patients and drug providers to submit ADRs manually. However, only a very small fraction of all ADRs is submitted to these systems – experts estimate that over 90% of all reactions go unreported.

Twitter can help!
On the other hand, there are millions of messages on Twitter that discuss medications and their side-effects. These messages contain data on drug usage in much larger test sets than any clinical trial will ever have. Inspired by this, research teams worldwide, including our team at Zurich University of Applied Sciences, are beginning to utilize these messages for ADR detection. The goal is to automatically find relevant messages, to “understand” their content, and to extract structured data about the drugs and (unwanted) reactions. 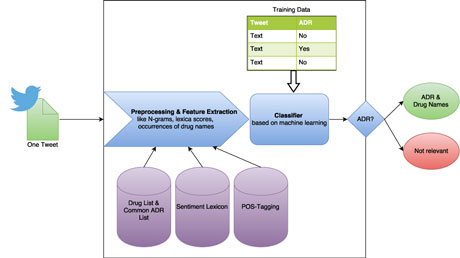 A typical approach for ADR detection uses Natural Language Processing (NLP) to analyze tweets automatically. Input for the system is the entire stream of Twitter messages. Each individual tweet is analyzed, using a classification system as shown in Figure 1: The tweet is preprocessed and a set of relevant properties (“features”) is extracted. Then, a classifier decides whether the tweet mentions an ADR. This classifier is based on machine learning and was trained beforehand on thousands of sample tweets that were tagged by humans. Finally, a system for named entity extraction is used to output a drug name and associated ADRs.

This approach is similar to technologies for sentiment analysis, which decide whether a tweet is positive or negative. Sentiment analysis is already successfully applied, for instance, in market monitoring, customer support and social media analysis.

State-of-the-art
Our ADR system, which implements the technologies shown above, achieves a success rate of 32% (measured in F1-score). This is comparable to other academic ADR systems: in an open international competition this year, even the best systems achieved only a success rate of approximately 40% [2].

For a preliminary evaluation on real-world data, we applied our ADR system to the full Twitter stream. The low precision of the system resulted in 20% of all tweets being classified as ADR. This is way too high; there are not that many ADR tweets in the Twitter stream. For this reason, we pre-filtered the stream with a list of 1678 drug names. Out of about 50 million tweets, this resulted in 13,000 tweets referencing drugs. Using the ADR system on this reduced set yielded 2800 tweets. We expect to find more than 60% of these to be true ADR tweets.

Future improvements
Automatic detection of ADRs on Twitter (or other social media channels) is still a very young discipline, which only started some five years ago. There are only a few teams working on the topic at the moment, and a first large-scale benchmark dataset was only published in 2014 [3]. However, we expect a significant improvement in detection rates in the near future, owing in part to the existence of several new technologies in machine learning, such as word embedding and deep learning. These have already been successfully applied to other text analysis tasks and have improved existing benchmark scores there. Applying these technologies to ADR detection will probably help to increase the detection rate significantly. In addition, our team is working on a system that not only analyzes the text of a tweet, but also its context: the timeline of the user, other messages in the same geographic or temporal context etc. This will allow us to “step back” from an isolated event (a single tweet) and see the “whole picture” of the discourse on Twitter.

Please contact:
Mark Cieliebak
School of Engineering, Zurich University of Applied Sciences (ZHAW)
Tel: +41 58 934 72 39
E-mail: This email address is being protected from spambots. You need JavaScript enabled to view it.