Throughout our lives our blood vessels form new capillaries whose insufficient or excessive growth is a key factor in disease. During wound healing, insufficient growth of capillaries limits the supply of oxygen and nutrients to the new tissue. Tumours often attract capillaries, giving them their own blood supply and a route for further spread over the body. With the help of biological and medical colleagues our team develops mathematical models that recapitulate how cells can construct new blood vessels. These models are helping us to develop new ideas about how to stimulate or stop the growth of new blood vessels.

The goal of our mathematical modelling project is to find out the rules that cells must follow in order to form biological structures, such as networks and blood vessel sprouts. Our models describe the behaviour of the individual cells: how they move, the strength of their adhesion to adjacent cells, their shape, and their response to signals from adjacent cells and from the extracellular matrix. If we understand how cells must behave to form a new blood vessel, perhaps then we can also learn how to use pharmaceuticals to fine-tune that behaviour so the cells do what we want them to do. If we could do this for a relatively simple mechanism like blood vessel growth, this might give us new ideas for other steps in the development of multicellular organisms.

In an initial set of models, we assumed that cells attract one another via chemical signals. It is not difficult to see that this rule will not suffice for forming networks: It simply makes the cells accumulate into small aggregates. To our surprise, however, the same rules could make cells form networks if the cells had an elongated shape. This makes the aggregates stretch out, and connect to adjacent aggregates such that a network emerges. But the cells did not need to be elongated: if instead the cells became insensitive to the attractive signals at the positions of their membranes where they touched one another, they also organized into networks.

Our recent work employs these two models to gain greater insight into the mechanisms of angiogenesis. Our initial models ignored that in actual angiogenesis, two types of endothelial cells are involved: the tip cells that lead the sprouts, and the stalk cells that form the body of the sprout by ``stalking’’ the tip cells. Recent experimental observations have shown that one of the stalk cells regularly replaces the tip cell, much like migratory birds take turns in the leading position in front of the “V”. Much experimental work has focused on the molecular regulation of this phenomenon. We discovered that such tip cell overtaking occurs naturally in our models, as a side effect of the cell behaviours responsible for sprouting. We integrated the molecular networks responsible for tip-stalk cell differentiation inside each of the simulated endothelial cells, and could reproduce many of the experimental observations that were taken as evidence for the molecular regulation of tip cell overtaking [1] (Figure 1). Thus our models suggest that the molecular networks may be there to ensure that the cell that happens to end up in front takes on the role of leader. 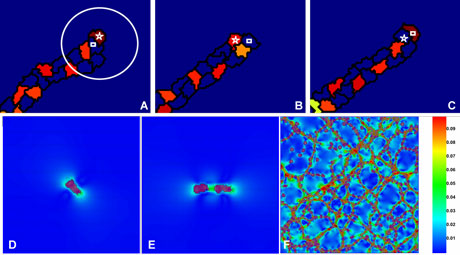 Figure 1: Models of blood vessel growth. (A-C) Growth of a sprout and “overtaking” of the tip cell. Colour scale indicates state of the embedded genetic network models; red: high expression of tip cell marker Dll4; blue: low Dll4 expression. Figure modified from Ref. [1]. (D-F). Model of mechanical interaction between cells and extracellular matrix. Due to the cell-matrix interactions, the cell elongated (D), they align with adjacent cells (E), and they form networks (F).  Figure by EGR, reprinted in modified form from “Merks. ITM Web of Conferences, in press” according to the model described in Ref. [2]. Figures A-F reproduced under the terms of the Creative Commons Attribution 4.0 International License (http://creativecommons.org/licenses/by/4.0/).

Despite the insights we acquired from our initial models, they ignored a key component in angiogenesis. Most cells in our body are surrounded by a fibrous or jelly material called the extracellular matrix, or “matrix” for short. It has a structural role – the matrix gives our bones their strength and keeps cells together – but recently it has become clear that it also acts as a medium for cell-cell signalling. Cells deposit growth factors into the matrix, which other cells find later on, as if cells leave “written” notes for one another. Also, cells apply mechanical forces on the matrix, and they respond to forces they feel in their surroundings. In this way the matrix can relay mechanical signals from cell to cell. Recently we have started to explore how such mechanical cell-cell signalling can help coordinate the behaviour of endothelial cells. We extended our models of angiogenesis with a finite-element model of the extracellular matrix [2]. The endothelial cells apply contractile forces on the matrix. The finite-element model then calculates the strains resulting from these forces, which, in turn, affects the membrane movements of the cells. These relatively few assumptions reproduced observations on how matrix stiffness determines the shape of single cells, how adjacent cells interact with one another, and how cells form vascular-like sprouts and networks (Figure 1).

Now that our models have given us some first clues on how cells build blood vessels, we are taking these insights back to our experimental collaborators. The basic understanding of angiogenesis captured by our models is employed in more specific models of diseases, e.g., diabetic retinopathy. The models give the experimentalists new ideas on how to “nudge” the endothelial cells to do, or not do, what they want. Of course, biology still has many surprises in store for us; rarely do experiments agree with our models in every detail. Frustrating as this may sound, this is actually when our models become most useful. Mismatches between model and experiment highlight the areas in vascular biology that are not yet fully understood.

Please contact:
Roeland M.H. Merks
CWI, The Netherlands
E-mail: This email address is being protected from spambots. You need JavaScript enabled to view it.