Invasive non-native plant and animal species are one of the greatest threats to biodiversity on a global scale. In this collaborative European project, we use a computer modelling approach (in association with field studies, ecological experiments and molecular work) to study the impact of an important invasive seaweed species (Undaria pinnatifida) on native biodiversity in European coastal waters under variable climatic conditions.

The introduction of non-native species can transform habitats and disrupt ecosystems resulting in serious environmental and economic consequences. Non-native seaweeds represent one of the largest groups of marine invasive organisms in Europe. However, often the fundamental processes that affect their population dynamics and invasion success are poorly understood making it difficult to develop optimal management strategies at both a local and international scale.

The Asian kelp species Undaria pinnatifida (Wakame) has been nominated as one of the world's 100 worst invasive species according to the Global Invasive Species Database [1]. This species is the focus of a collaborative European research project supported by an Irish-Research Council-Marie Curie Actions co-funded Elevate international career development fellowship (2013-16). It involves a close collaboration between the Ryan Institute at the National University of Ireland, Galway and the Station Biologique de Roscoff, France (jointly operated by the French National Centre for Scientific Research (CNRS) and the Pierre & Marie Curie University, Paris (UPMC)).

The aim of this project is to develop a robust, scalable agent-based modelling tool to investigate expansion rates, abundance and ecological functioning of invasive seaweeds. The agent-based (or individual-based) modelling paradigm is a useful approach for modelling algal populations as it allows the large-scale population dynamics to be derived from simple rules dictating the growth and interactions of the individual members of the population.

Some of the questions that we aim to explore, by combining a theoretical and field-based approach, include:

The model framework was developed in the C++ programming language and is fully parallelisable to take advantage of high performance computing resources [2]. It represents a robust and adaptable tool to simulate spatially and temporally heterogeneous phenomena in a coastal environment. A detailed model of the life cycle of U. pinnatifida (including the distinct microscopic gametophyte and macroscopic sporophyte stages) was then built upon this basic framework (see Figure 1). 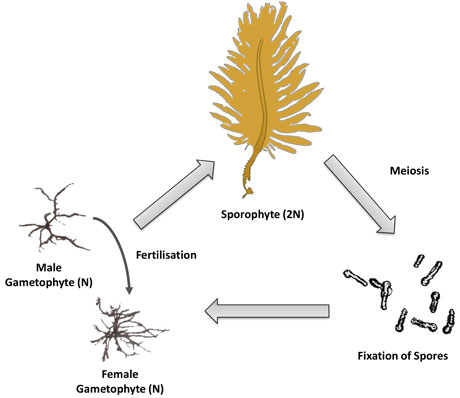 Figure 1: A schematic representation of the annual life cycle of the invasive kelp species Undaria pinnatifida, which alternates between the microscopic gametophyte stages and the sporophyte stage (which can grow up to 3 metres in length).

Quantitative data from the literature on the responses of the individual life stages to environmental factors such as light and temperate were used in order to build up a mechanistic model of the overall population growth. For example, photosynthesis-irradiance curves are used to represent the effect of sunlight levels on growth, and thermal performance curves are incorporated to account for the effect of water temperature on development. This allows us to integrate the effects of different environmental conditions on growth dynamics and make predictions about potential expansion into new habitat ranges.

Simulations have been carried out, using environmental parameters representative of Brittany, France, in order to validate the model against field data collected by researchers at the Station Biologique de Roscoff, France. Initial results are promising and indicate that the model can accurately predict the growth dynamics of an U. pinnatifida population in situ and allow us to trace back the behaviour of the population to the complex interactions at the individual level. Future work will involve investigations into how changing climatic conditions may affect the range expansion of this species in the future.

The problem of biological invasion and resulting biodiversity loss in coastal habitats is a complex question that cannot be answered by purely theoretical or empirical means. This project aims to tackle this question using the combined toolsets of both fields of study and to integrate them into a coherent strategy for control and maintenance of biodiversity in coastal habitats. This type of multi-disciplinary research will help to inform decision processes in relation to the control/management of invasive species in the marine environment at both a national and regional scale.